Leading anti-Trump activists backed by major leftist donors are actively working with one task in mind: undermining the credibility of America’s leaders and creating a “political crisis” that forces President Donald Trump and Vice President Mike Pence from office.

Presentations from the group’s training conferences this weekend reveal the activists plan to impede the “ability to govern” of “those in power” and make America’s leaders “lose respect and legitimacy in the eyes of people here and internationally.”  The group emphasizes that costing America’s leaders “international legitimacy” is key because it “is a very critical calculation for the rulers of this country.”

Refuse Fascism is a far-left protest group that was launched in the aftermath of Trump’s election with the stated purpose of driving Trump and Pence out of the White House. As reported by TheDC’s Chuck Ross, the group is financially backed by a progressive nonprofit that in turn is well-funded by George Soros, a major labor union and several other large companies. Refuse Fascism has led mass demonstrations around the country and played a central role in organizing the violent Berkeley riots.

For months, Refuse Fascism has been planning massive, nationwide demonstrations for November 4. According to the group’s statements, the protests are part of their long-term strategy of creating a “political crisis” resulting in both Trump and Pence being forced from their elected offices. (RELATED: In Their Own Words: Anti-Trump ‘Resistance’ Leaders Say They Want To Make America ‘Ungovernable’)

Around 450 activists attended Refuse Fascism’s organizing conferences this weekend in preparation for the massive demonstrations in November. The group posted materials from the conference online. 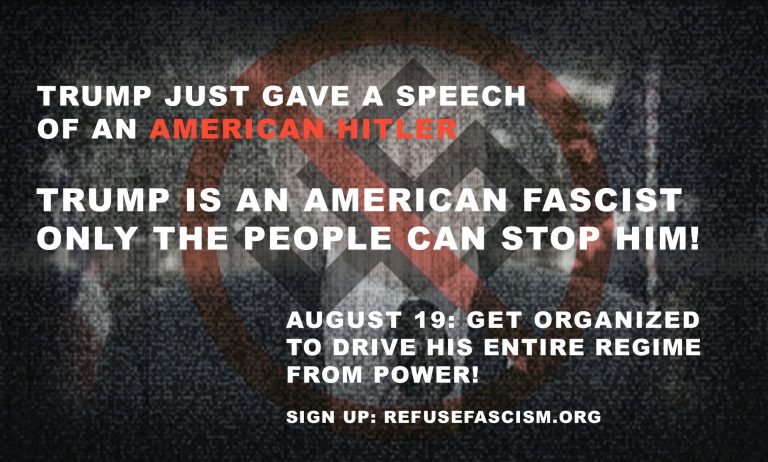 “If those in power are faced with this determination—including that every time they take steps to attack or undermine and diminish this movement, they are met with even more people coming into the streets,” one presentation from the conference states, “then their ability to govern, to conduct business as usual will be disrupted; they will lose respect and legitimacy in the eyes of people here and internationally—and this—international legitimacy—is a very critical calculation for the rulers of this country.”

The presentation continues: “Facing this kind of serious political crisis, sections of those in power could be compelled to see it in their interest to find the ways to resolve an extraordinary and unprecedented political crisis and remove this regime from power.” (RELATED: DNC Platform Member Cornel West Tied To Violent Berkeley Rioters)

Another presentation states the Trump administration must be driven from power because it is “working aggressively to impose a fascist Biblical literalist society that enslaves women, terrorizes LGBTQ people, erases science, indoctrinates generations of youth in Christian fundamentalist and creationist schools.”

Left-wing factions of the Democratic Party have played to their base for months by calling for Trump’s impeachment. (RELATED: Maxine Waters Leads Impeachment Chant At Anti-Trump Rally [VIDEO])

However, Refuse Fascism’s activists believe elected Democrats can’t be trusted to go far enough in their opposition to Trump.

“The program of the Democratic Party and their media mouthpieces is restoring the norms. So people who hate and oppose the regime are being led by them to look to elections, hearings, investigations, and protest as usual to ‘make their voices heard,’ as if we are dealing with a normal regime,” the presentation states. “We are not.”