House Minority Leader Nancy Pelosi is proud President Donald Trump sided with Democrats on a debt ceiling agreement and said Thursday it was in part due to Senate Minority Leader Chuck Schumer being able to speak “New York” with the president.

President Trump backed a deal Wednesday to extend the debt ceiling by three months. House Speaker Paul Ryan wanted to extend it by 18 months and had called the proposal “disgraceful.”

“It was a very long, intense conversation,” Pelosi said Thursday about Wednesday’s meeting between Trump and congressional leaders. She added, “I was very proud of Senate Democratic Leader Chuck Schumer. He could speak New York to the president.” 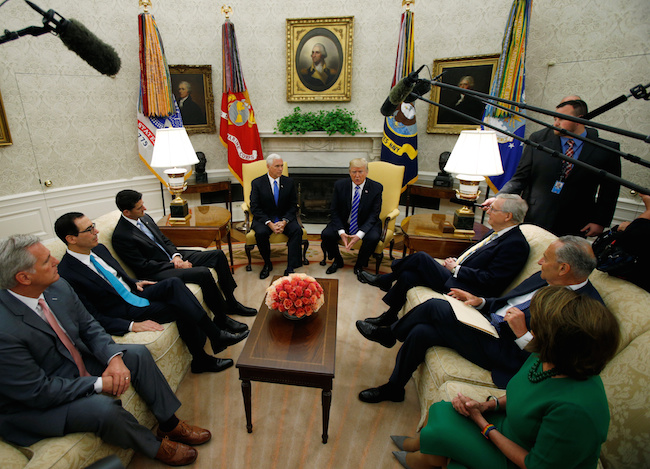 Trump is now asking Congress to pass legislation to protect the roughly 800,000 illegal immigrants with Deferred Action for Childhood Arrivals (DACA) status. This is a flip-flop from Trump’s stance on the campaign trail that there would be no amnesty.

“For all of those (DACA) that are concerned about your status during the 6 month period, you have nothing to worry about – No action!” Trump tweeted Thursday about the slow wind-down of the program. Pelosi said during her press conference Thursday that she had asked Trump to put out such a tweet.

“I was reporting to my colleagues, ‘this is what I asked the president to do,’ and boom boom boom, the tweet appeared,” Pelosi said. Democrats are hoping for the Dream Act to pass in order to give a path to citizenship for DACA beneficiaries and thousands more illegal immigrants. 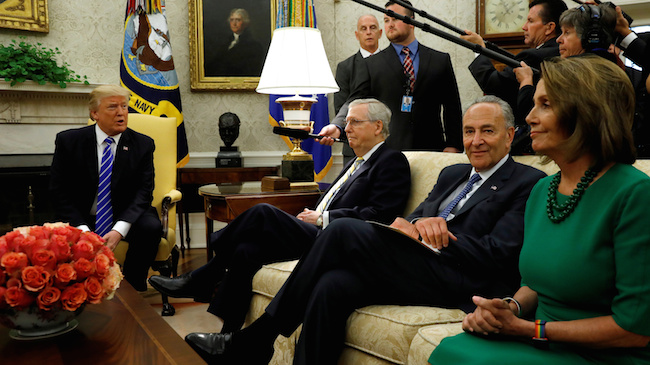 “We think we have the stronger hand now,” Pelosi stated. She said that Trump told her he would “probably” sign a bipartisan Dream Act with border security measures.

Ryan said earlier in the day that he is hoping to reach a compromise with Democratic lawmakers in which they back border security in exchange for the amnesty.

Immigration hawks, such as Republican Arkansas Sen. Tom Cotton, are hoping for restrictions in legal immigration before any sort of amnesty for DACA recipients is granted.