There comes a time in every gun writer’s career when he must consider the end of the world as we know it and the apocalypse guns required to survive.

It’s not a bad exercise for anyone to undertake, given the security and safety of modern life is deceptive and fragile. There are the obvious culprits that could turn the lights out — war, plague, natural disaster. But the mundane — lack of power or hyperinflation for instance — could equally prove to be the cracks that break the façade of our comfort and security.

God forbid these end days are ever visited on us and those we love. But it’s better to tackle the scenario head on and be prepared, than to whistle past the graveyard. With that in mind, here are three must-have apocalypse guns to see you through these dark times.

While self-defense was a consideration in putting together the list, it was not the sole criteria. The apocalypse would be the ultimate survival situation, and that’s what these firearms are meant to do — help you survive. In turn, the guns chosen were also: versatile, reliable, fed with common ammunition and wide-spread enough to scrounge replacement parts, if need be.

Let us know if these apocalypse guns will see us through until we boot-strap society from the rubble or if we’re goners in the comments below.

While there are diehard fans of both pump-action shotguns, each is rugged and versatile enough to handle the apocalypse. On top of that, given their sheer ubiquity, it’s plausible replacement parts could be scrounged up with minimal effort. Heck nearly every gun store and Walmart carry the dang things, and between the two more than 20 million have been produced.

Both are available with 3-inch chambers; in turn they can digest the majority of 12-gauge shells produced. With the right load, they are ideal for collecting almost any game in North America, but they would also be superlative weapons for most post-apocalyptic defense applications. Given these are point, not aim, firearms, the margin of error is cut down in placing an effective shot. And considering most defensive encounters are at close range, a shotgun is a practical choice. On top of that, with a simple manual of arms, those who are perhaps not gun savvy can quickly learn to proficiently wield both the Remington 870 and Mossberg 500.

The admitted drawback to the pump-actions is their capacity. Off the shelf and unmodified, the top capacity 870 model holds seven shells, the 500 eight. But once again, this is survival, not small-unit tactical maneuvers. If competently handled, both smootbores should provide the firepower required for all but the direst circumstances.

A telescoping stock would be a wise upgrade, as would ghost ring sights (if not stock on the model you chose), just in case you do attempt a more distant shot at range.

The AR-15 wins out in this category because it provides its individual users ample firepower in a relatively simple platform and the potential of versatility. The ubiquitous black rifle could be the difference maker if you found yourself outmanned in the ashes of society. In a world of unknowns, a couple of fully loaded 30-round magazines would provide serious peace of mind.

The dominant chambering for the rifle — 5.56 NATO/.223 Remington — should make scavenging for ammo simpler than other rifles, given its military use. That is, if it isn’t all shot up in the first week of civilization’s downfall in assaults on and in defense of grocery stores. But the AR-15 does hold an ace up its sleeve in this respect. It is not beyond consideration the components for a caliber conversion could be squirreled away or scraped up, thus giving users multiple rifles in one platform.

The AR-15 does have an Achilles’ heel, however. The rifle can be maintenance intensive, particularly ensuring the small-caliber rounds chamber properly, the direct gas impingement operating system remains functional and all components are properly lubricated. This takes time and supplies — both of which can be in short supply when cannibals are on your trail.

It’s a jungle when it comes to the AR-15 market, with a dizzying blur of makes and models. But it can be simplified by going with rifles that have been fairly well time-tested, such as the Smith & Wesson M&P15 Sport II or Colt LE6920 series. Whatever brand is chosen, it’s advisable they have a dust cover, forward assist and iron sites.

Glock built its name on reliability, so it makes it a shoo-in for a survivalist’s sidearm. But out of its extensive family, which to choose? Once again, versatility is one of the names of the game here, which would make the Glock 41 the most logical choice.

The hefty .45 ACP round is not only a top choice to save your skin if Lord Humungus and his mutant warriors attack, it’s also a viable hunting round. If there are hogs in your neck of the woods, you’ll be dinning on post-apocalyptic pork chops during the end days with the 41 on your hip. The gun also has the capacity to keep it relevant in a defensive situation. You’ve got big problems if a couple of its standard 13-round magazines can’t extricate you out of a bad situation.

As a full-sized pistol, a striker-fired on top of that, the Glock 41 is configured such that new shooters can become quickly acclimated to it. The weightier gun helps manage the recoil, while the snappy trigger break aids in its accuracy. The handgun’s longer sight radius doesn’t hurt in keeping it on target either. 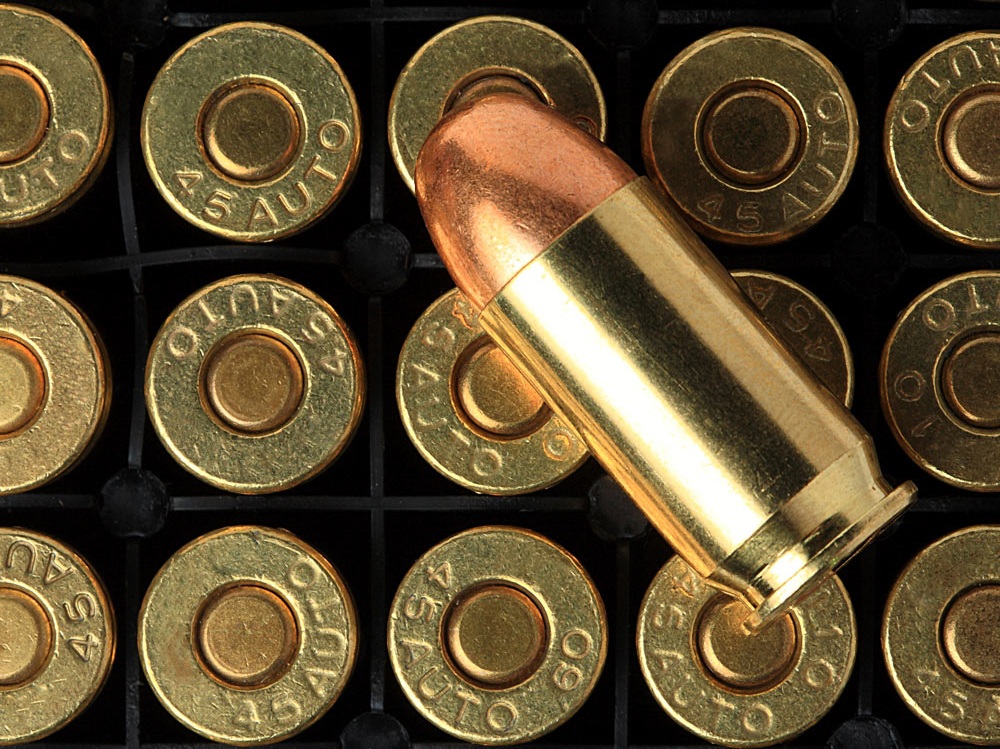 There are few chinks in the pistol’s armor, but there are a couple issues worth mentioning. While not rocket science, semi-automatics do require know-how to operate proficiently, particularly addressing common malfunctions. And there is something to be said about the virtues of hammer guns, whether it is the second-strike capabilities of a semi-auto or the simplicity of a revolver.

The gun would be a solid performer out of the box. The one upgrade worth considering might be a set of tritium night sights, just in case the bad guys come in the dark. Be Prepared
Whatever the emergency – be it natural disaster (hurricane, fire, flood or tornado), severe social situation – getting through it can be based on the firearms you own. In Gun Digest Book of Survival Guns, you’ll not only gain valuable tactics for handling and surviving any emergency, you’ll pick up valuable information for putting your firearms availability and your knowledge of them to good use.

1
Farrakhan Accuses Fauci And Bill Gates Of Plotting To 'Depopulate The Earth' With Coronavirus Vaccine
US
2
Black Lives Matter Totally Shuts Down Nation’s Capital On Independence Day
US
3
Colin Kaepernick Condemns July 4th As 'Celebration Of White Supremacy'
Sports
4
Leo Terrell: ‘Embarrassed To Be A Democrat’ After DNC Plays ‘Race Card’ With Mount Rushmore
Politics
5
Sen. Tammy Duckworth: 'We Should Listen To The Argument' For Removing George Washington Statues
Media