The ratings for NFL “Thursday Night Football” continued to drop again this week, scoring a 9.9/17 in metered market results on CBS and the NFL Network, according to Deadline Friday.

The AFC-West battle that saw the Oakland Raiders eek out a victory over the Kansas City Chiefs 31-30 Thursday night in Oakland did not do enough to turn around the ratings struggle that the National Football League and networks have been facing this year. The “TNF” ratings were 7 percent lower than the previous week’s game in early numbers.(RELATED: ‘Thursday Night Football’ Ratings Up Over Last Week) 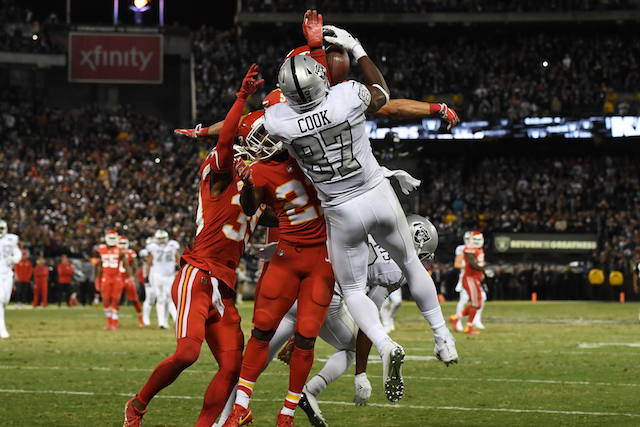 Jared Cook #87 of the Oakland Raiders makes a catch at the one-yard line of the Kansas City Chiefs in the final moments of their NFL game at Oakland-Alameda County Coliseum on October 19, 2017 in Oakland, California. (Photo by Thearon W. Henderson/Getty Images)

The fall continues, with last week’s game between the Philadelphia Eagles and the Carolina Panthers scoring 14.6 million viewers, which was 5 percent lower than the week prior.

The numbers from last night’s game matches the season low, which occurred on September 28th between the Chicago Bears and the Green Bay Packers, which came in 13 percent lower than than the game that aired the same week in 2016.

It should be noted that the “TNF” game was up against the National League Championship Series game between the Los Angeles Dodgers and the Chicago Cubs on TBS, with Dodgers winning and heading to the World Series.