The MLB ratings for Game 5 of the World Series trounced “Sunday Night Football” by 36 percent, according to Deadline Monday.

The epic battle in Texas between the Houston Astros and the Los Angeles Dodgers ended up going into the 10th inning before the home team came away with a 13-12 victory and a lead of 3-2 in the series. The showdown lead to a 12.8/24 in metered market results and a win for the battle of viewers over the NFL, which scored a 9.4/15 in overnight ratings. (RELATED: The World Series Ratings Just Topped The NFL For The Second Time Ever) 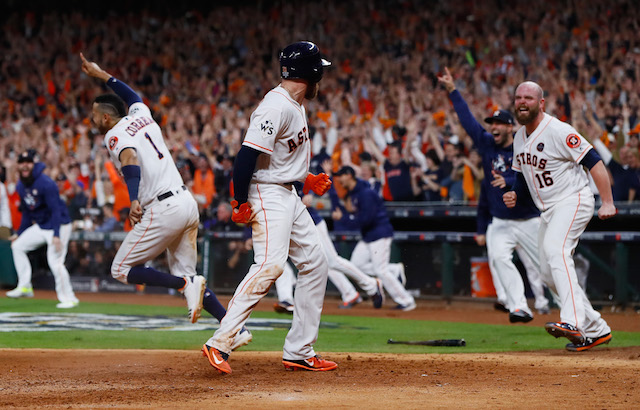 Derek Fisher #21 of the Houston Astros celebrates with Brian McCann #16 after scoring the winning run during the tenth inning against the Los Angeles Dodgers in game five of the 2017 World Series at Minute Maid Park on October 30, 2017 in Houston, Texas. (Photo by Jamie Squire/Getty Images)

The second longest game in World Series history also ended up earning the second highest ratings a Game 5 has had since 2003. The night saw 20 million viewers tune in and a 5.5/17 among adults ages 18-49.

In comparison, last year’s historic game 5 between the Chicago Cubs and the Cleveland Indians scored 23.6 million viewers and a 6.7/19 rating in the key demographic.

The Sunday night football matchup between the Pittsburgh Steelers and the Detroit Lions failed to beat last week’s numbers by 25 percent and were down against the same week a year ago by 17 percent, bringing in 12.67 million viewers.