At least eight were killed and several more injured when terrorist Sayfullo Saipov sped a rented Home Depot truck down a two way bike path near the West Side highway in lower Manhattan. The FBI is investigating the terror attack and have discovered evidence that Saipov may have been loyal to ISIS. NowThis, however, characterized the event by calling it a “Trump rampage.” 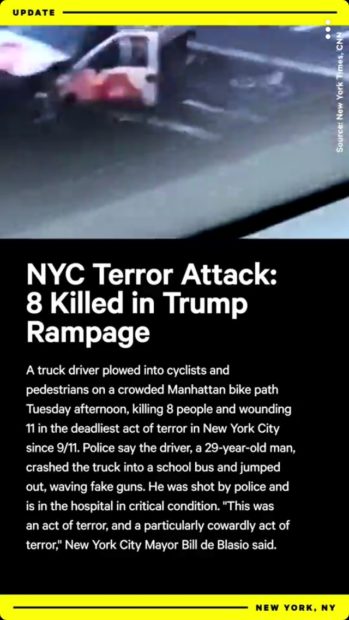 NowThis has a history of attacking Trump. Last June, the outlet doctored video of then-candidate Donald Trump to distort his response to the Orlando ISIS-inspired shooting. (RELATED: Here’s The Cop Who Brought Down The NYC Terrorist)

NowThis did not respond to a request for comment from The Daily Caller News Foundation in time for publication.

WATCH: THE LATEST ON NYC ATTACK

1
NBC News Spent Weeks Reporting On A Contributor's Journey Battling Coronavirus – But Now He Says He Never Had It
Media
2
FARRELL: Samantha Power's Massive Unmasking Effort
Opinion
3
'I Made A Regrettable Mistake': ESPN Reporter Apologizes For Telling Sen. Josh Hawley 'F**k You'
US
4
Trump Gets Really Bad News In Latest Poll
Politics
5
Woman In Bikini Dances Around Her Car After Big Crash, Gets Thrown To The Ground By Police
Entertainment