The ratings for NFL’s “Thursday Night Football” jumped up 10 percent from the week prior, according to Deadline Friday.

The NFC East battle in Arlington, Texas last night might not have been a barn-burner, but that didn’t translate to low ratings as the Dallas Cowboys 38-14 victory over rival Washington Redskins scored a 10.7/18 in metered market results on NBC and the NFL Network. (RELATED: NFL Popularity Plummets In New Poll, Especially Among Republicans) 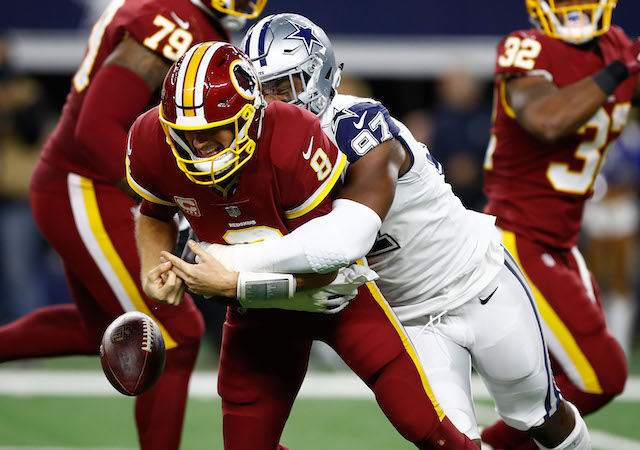 Kirk Cousins #8 of the Washington Redskins fumbles the ball after a hit by Taco Charlton #97 of the Dallas Cowboys in the second quarter of a football game at AT&T Stadium on November 30, 2017 in Arlington, Texas. (Photo by Wesley Hitt/Getty Images)

Those numbers not only show an increase in the ratings over last week’s Thursday night game between the Redskins and the New York Giants, but the highest ratings any primetime Thursday night game has scored on any network during the 2017-2018 season since the New England Patriots’ victory over the Tampa Bay Buccaneers on October 5.

However, looking at last night’s game compared to a year ago, it was down by 24 percent from the Thursday night matchup between the Cowboys and the Minnesota Vikings that ended up scoring a 6.8/25 among adults ages 18-49 with 21.76 million viewers.

In comparison, the Thanksgiving primetime game last week earned a 5.1/20 in the key demographic and had 16.91 million viewers tuned in.

In a season marked with a rollercoaster of high and low ratings, there was no national anthem protest last night on the field as viewers at home could clearly see the empty seats in Cowboy stadium.