While U.S. leadership gave North Korea the cold shoulder as expected, North and South Korea are coming together at the Winter Olympics in ways that few could have really predicted.

North Korean dictator Kim Jong Un has invited South Korean President Moon Jae-in to attend an inter-Korean summit in the North, a presidential spokesman revealed Saturday morning, according to the Associated Press. The invitation was extended by Kim’s younger sister Kim Yo Jong, a last-minute addition to the Olympic delegation.

The last inter-Korean summit was held nearly two decades ago.

At the Pyeongchang Winter Olympics, the theme of which is “peace in motion,” North and South Korea have been celebrating unity, despite the fact that each country has traditionally interpreted that concept very differently.

During the opening ceremony Friday, North and South Korean athletes marched together under a unified Korean banner, as they have done at 10 previous sporting events. The two countries torn apart by conflict were simply introduced as Korea.

Before the start of the opening ceremony, Moon and Kim shook hands, a historic moment on display for the entire world. Kim is the first direct member of the ruling Kim family to visit South Korea since the Korean War. 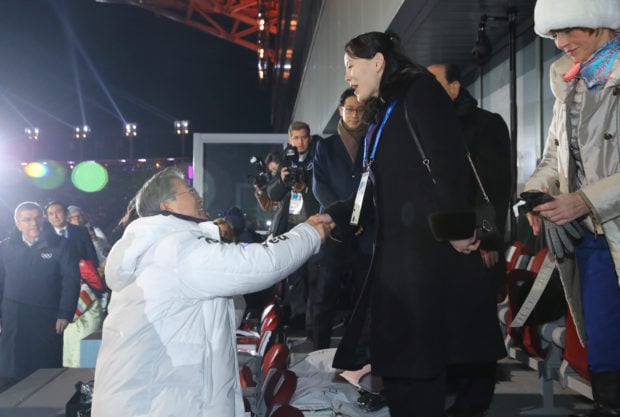 Moon and Kim met at Chong Wa Dae for discussions Saturday, and in another historic moment, Kim became the first member of the Kim family to sign the Blue House guestbook. Nearly 50 years ago, Kim’s grandfather sent commandos to South Korea to raid the presidential office and assassinate the South Korean president.

ALSO WATCH: Here’s What Shocked A Defector Most About Life Outside North Korea

Many observers remain suspicious of North Korea’s intentions, given the regime’s history of brutality and aggression. North Korea is likely advancing its own strategic interests by playing into Moon’s vision of a peaceful Korean Peninsula. As the North spent the past year threatening the world with ballistic missiles and nuclear weapons, people are wary of its recent behavior in the name of “peace” and “harmony.”