Democrats immediately politicized the Florida school shooting that left at least 17 people dead on Wednesday and demanded gun control legislation, even before it was known how the shooter got his gun and whether any proposed legislation would have stopped it.

Some Democrats blamed Republicans for Wednesday’s tragedy, without citing any evidence whatsoever.

“Republicans should pray for forgiveness, for not only their complacency and dereliction of duty, but in contrition for the men, women and children we continue to lay to rest because of senseless gun violence and the cowardly inaction from Congress,” Democratic New Jersey Rep. Bonnie Watson Coleman wrote on Twitter. 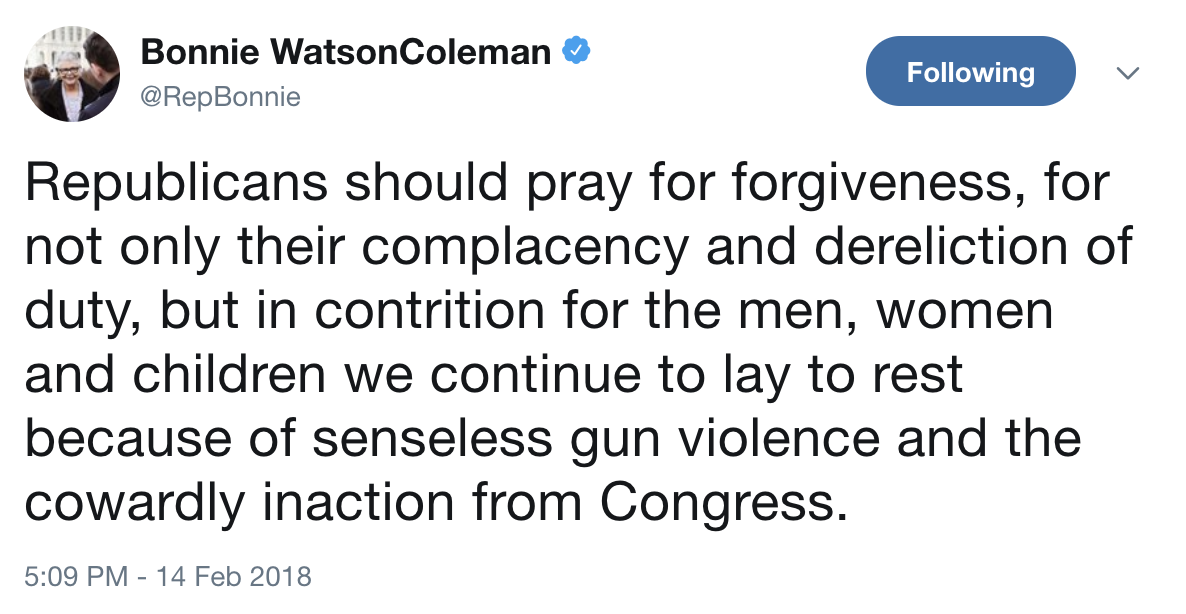 “How many more moments of silence must we hold before Republicans in Congress act? We are not powerless. There are measures we can and must take to make our communities safer,” Democratic Virginia Rep. Gerry Connolly said in a statement.

Democratic Massachusetts Rep. Seth Moulton took a shot at President Trump after the president expressed his condolences to the victims’ families. “I agree with every word @realDonaldTrump said here,” Moulton wrote on Twitter. “I invite him to get off his ass and join me in trying to do something about it.” 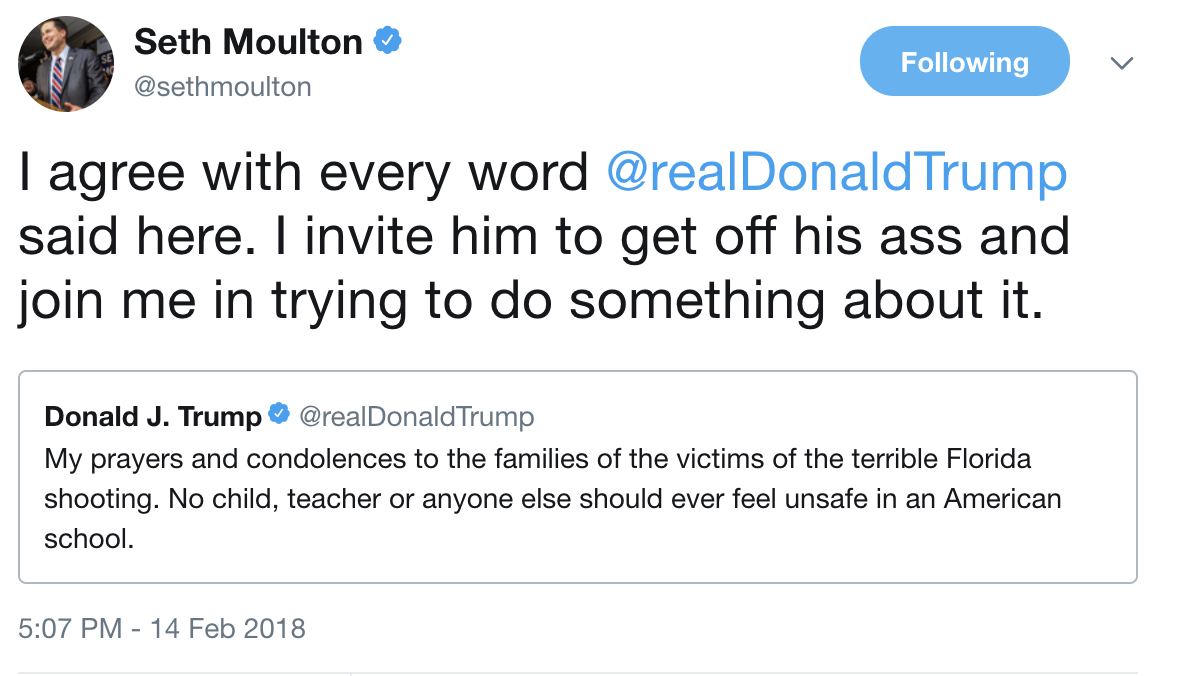 Even before the suspected shooter was in custody, Democratic Connecticut Sen. Chris Murphy took the Senate floor to blame the shooting on a lack of gun control.

“Turn on your television right now, you’re going to see scenes of children running for their lives. What looks to be the 19th school shooting in this country and we have not even hit March,” Murphy said, citing a misleading statistic put out by gun control proponents.

Murphy later claimed on Twitter that “If you’re a political leader doing nothing about this slaughter, you’re an accomplice.”

“I, too, offer thoughts & prayers…” Democratic  New Jersey Rep. Donald Norcross wrote on Twitter. “… I also offer my support to bring #gunsafety measures up for a vote.”

“Another senseless tragedy at an American school. My heart is with the victims and their families. When will we wake up? When will we take action to prevent these shootings from occurring? These tragedies are the new normal, and that should make all of us sick,” said Democratic California Sen. Dianne Feinstein.

“Prayers for students, teachers and parents at #DouglasHighSchool…Congress needs to finally find the courage to #EndGunViolence by passing #universalbackgroundchecks and renewing the #assaultweaponsban,” Rep. Lacy Clay wrote on Twitter.

“Once again, gun violence shatters lives with another school shooting. We need sensible gun control, like background checks and tracing of weapons. My heart breaks for the families affected & my thanks to the first responders in Florida,” said Rep. Nydia Velazquez.

“Heartbroken over another school shooting. Schools must be a safe space for all students & teachers, not the scenes of tragedy. Monitoring the situation. When will my @GOP colleagues finally agree #EnoughIsEnough & act on #gunsafety? Thoughts & prayers are meaningless w/o action,” wrote New York Rep. Carolyn Maloney.