Veteran comic book writer Christopher Priest called out the industry for labeling him a “black writer” and questioning why he could no longer write for a white character.

“So I got a call from DC, and they wanted to talk to me about Cyborg. I gave them the standard stump speech. ‘I don’t want to be a ‘black writer.’ When did I become a black writer,'” the 56-year-old writer told ComicBooks.com in a recent interview when asked about the state of the comic industry and what made him finally come back. 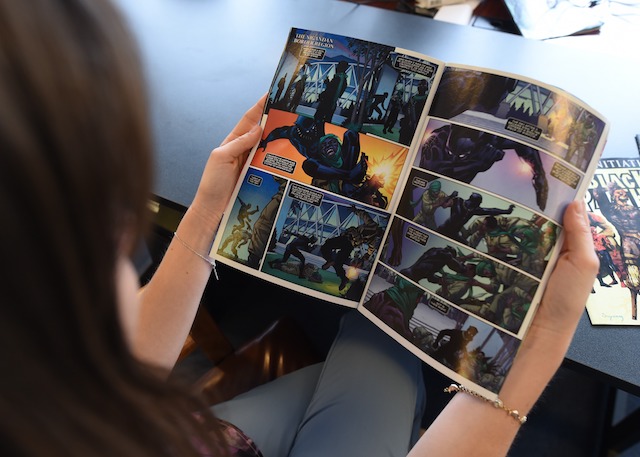 In this photo illustration a woman reads a copy of the Black Panther (T’Challa) a fictional superhero appearing in comic book published by Marvel Comics in New York May 17, 2016. (Photo: TIMOTHY A. CLARY/AFP/Getty Images)

Priest left the business for years after being part of it for more than 30 years, because he was only offered “black characters.” He explained that every 18 months he would get a call from Marvel or DC and “they would inevitably offer me a character of color, a black character or Latino character” and he would decline.

“‘I used to be a guy who would write Spider-Man, Deadpool, and Batman. Why am I no longer qualified to write those characters,'” the veteran writer shared. “‘How did I get typecast from writing ‘Black Panther’ of all things, when that series was never really about Black Panther.'”

“‘It was about the white guy, about Ross,'” he added. “‘It was narrated through his voice, and I thought I wrote a very well-constructed white character. Why are you now pigeonholing me as a guy who can only write black characters?'”

“I later found out that Marvel and, to a lesser extent, DC moved into a trend where they were no longer hiring writers—they were casting writers,” he continued. “They’re listening to chatter on Twitter insisting that only a black lesbian writer could write a black lesbian character, and that’s nonsense.”

“Don’t tell me I can’t write a Chinese lesbian superhero,” the comic book writer said. “That’s bullshit. I can write anything. The problem is the two major companies don’t have anybody of color in upper management with the exception of Jim Lee. There are certainly no African Americans in upper management. Anytime I’m writing anything about race now, I get all of these notes back where they’re wringing their hands and not sure about anything. They’re terrified of the Twitter-verse, but half of those people aren’t even reading your comics either.”

Priest recently decided to come back to the business after being offered “Deathstroke” from DC because they finally offered him not just a character that “wasn’t black; we were talking about a character with a lot of untapped potential for me to get inside his head and mine new ground with him.”