Under fire over his ties to Nation of Islam leader Louis Farrakhan, Democratic Minnesota Rep. Keith Ellison claimed Sunday that he hasn’t attended any meetings with Farrakhan since 2013 and “never had” a relationship with him.

Farrakhan is a notorious anti-Semite and racist whose organization teaches that white people are inherently inferior to black people. Ellison, the deputy chair of the Democratic National Committee (DNC), is a former Nation of Islam member who claimed when he first ran for Congress in 2006 that he had left Farrakhan in his past. (RELATED: Seven Louis Farrakhan Quotes On Jews, Gays And White People)

New reporting has shown, however, that Ellison attended multiple meetings with Farrakhan while in Congress. That includes a private visit to Farrakhan’s hotel room in 2015 with Democratic Indiana Rep. Andre Carson. Farrakhan referenced the meeting in a December 2016 Facebook video, and Carson has confirmed that he was present. When CNN’s Wolf Blitzer asked Ellison about that meeting, the congressman did not deny that the meeting took place but instead lashed out at his critics.

Ellison lashed out at his critics again in a blog post on Sunday, claiming that he never had a relationship with Farrakhan and hasn’t met him since 2013, apparently contradicting Farrakhan and Carson’s accounts. Ellison did confirm his presence at two Farrakhan meetings that took place in 2013. Ellison claimed questions about his Farrakhan ties are “a smear by factions on the right who want to pit the Jewish community and the Black community against each other.”

“I do not have and have never had a relationship with Mr. Farrakhan, but I have been in the same room as him,” Ellison wrote. “About a decade ago, he and I had a brief, chance encounter in Washington, D.C. In 2013, I attended a meeting in New York City with Iranian President Hassan Rouhani and nearly 50 others where I advocated for the release of an American political prisoner. I didn’t know Mr. Farrakhan would be there and did not speak to him at the event. Contrary to recent reports, I have not been in any meeting with him since then, and he and I have no communication of any kind.”

“But as the attacks on me and my fellow Black representatives in Congress intensify, I want to be clear: this is a smear by factions on the right who want to pit the Jewish community and the Black community against each other, and distract from the hatred and bigotry on display by the president and the white supremacists who stormed Charlottesville this summer with their anti-Semitic chants and Confederate flags. I declined to dignify questions raised about Mr. Farrakhan because I know they are inherently political, and are designed to separate me from people who I work with every day on issues of importance for Americans of all backgrounds,” Ellison continued.

“The critics will not be satisfied. They won’t be satisfied any more than President Obama’s production of his birth documents satisfied his critics, or Hillary Clinton’s eleven-hour testimony before the House Select Committee on Benghazi sated her detractors,” he added.

Ellison’s blog post comes as he is increasingly under fire over his ties to Farrakhan.

The Washington Post awarded Ellison “Four Pinocchios,” their worst possible rating, for claiming that his relationship with Farrakhan ended in 2006. The post cited The Daily Caller’s reporting in the fact-check.

“If your leader does not have the same enemies as Jesus, they may not be THE leader!” Mallory wrote on Twitter. She has repeatedly declined to condemn Farrakhan. 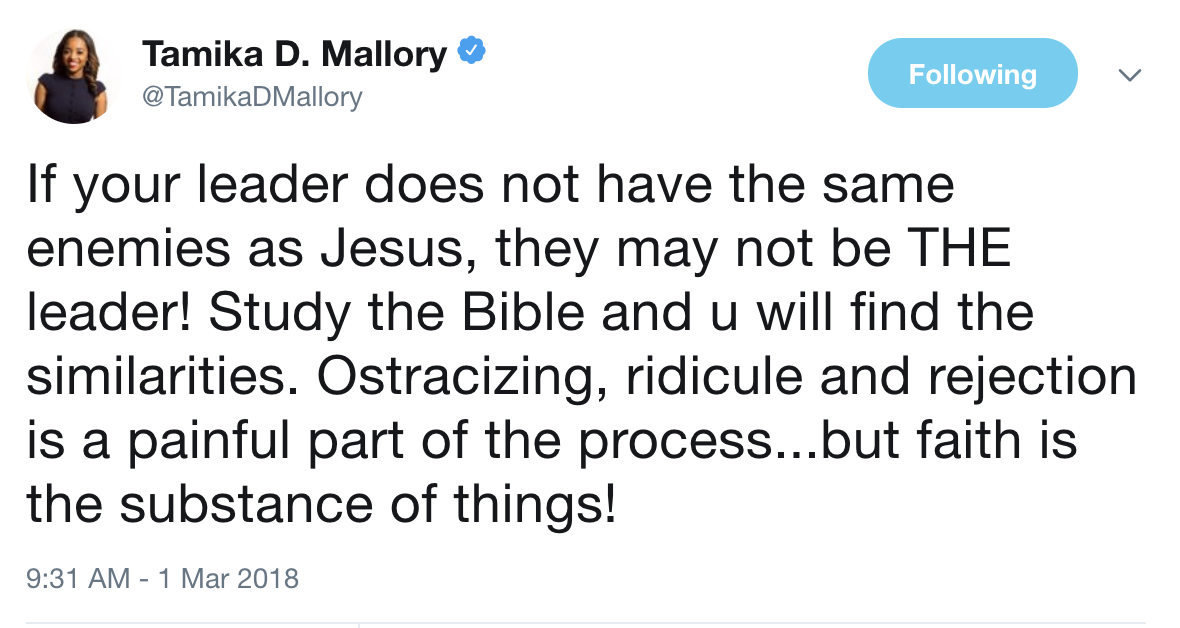 Women’s March has lost supporters over the Farrakhan scandal, and several regional chapters have slammed the national organization for refusing to denounce him. The group’s social media director, Alyssa Klein, resigned over the group’s support for Farrakhan, the New York Post reports.