Jake Tapper hosted Psaki and contributor Mary Katherine Ham on his CNN show Tuesday. The conversation turned to President Trump’s response to his rising approval numbers, in which POTUS took a shot at Obama.

Thank you to Rasmussen for the honest polling. Just hit 50%, which is higher than Cheatin’ Obama at the same time in his Administration.

“The president brought up former President Obama, your former boss,” Tapper posed to Psaki. “He blamed him for, quote, ‘basically creating no border.'”

“I didn’t even understand what he was talking higher than,” he continued. “He was talking about his poll numbers in Rasmussen, ‘higher than Cheatin’ Obama at the same time in his Administration.'”

“I don’t know exactly what he’s referring to with the Cheatin,” Tapper added. “It’s an interesting thing to bring up during the Stormy Daniels saga, certainly. What’s your response?”

“Well given Trump’s history, you can also guess that he might — there might be racial undertones there,” Psaki responded. “He was the founder of the birther movement. Perhaps I’m going to a very evil place with that but I think history tells us that’s a possibility.”

“Do you think he’s saying because he’s black he cheats?” Tapper asked as a followup. “I don’t even understand what he meant anyway.”

“Who knows? I don’t know,” Psaki answered. “If he cheated, if he shouldn’t have been president, if he wasn’t warranted to be president, there’s lots of possibilities.” 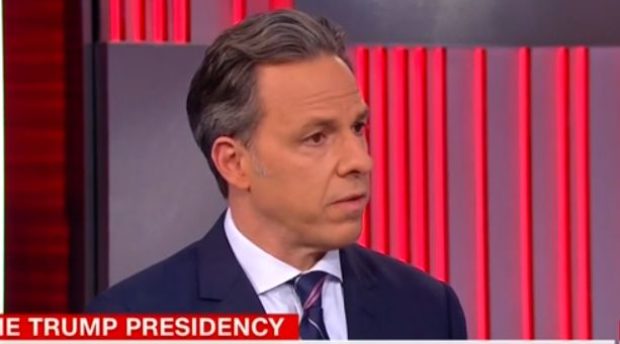 “I think without the context of his history, I would never go to that,” Psaki said. “But I think that’s a possibility. Beyond that factually I think one we know, anyone who’s worked in politics, that one outlier poll tells you nothing.”

“What you’re looking at is rolling averages,” she continued. “His rolling average from the first year was 38 percent, which is 10 — 11 points below any other president since 1945. The next was President Clinton.”

“So, yes, it’s sort of sad actually that he’s grabbing this outlier poll,” she concluded. “I don’t think anyone, President Obama and anyone who’s worked with him is particularly worried about it. What it means, I don’t really know, that’s just my best guess.”

Tapper and Psaki were referencing Rasmussen’s Daily Tracking Poll released Monday, which showed President Trump with 50 percent presidential approval. Rasmussen was one of the most accurate polls in regard to calling the results of the 2016 presidential election.