After the Baltimore riots, Dr. Richard Vatz discussed the politics of fatherlessness, saying:

“Progressive political leaders are loathe to address or discuss fatherlessness as a problem and resent those who do… When I have discussions on the topic with Republicans, they say the issue should be front and center but claim there is no willing audience to hear it.”

But as public consciousness has increased on the ramifications of fatherlessness, is this still accurate?

My piece about the attack on boys has been one of the top trending articles on the site since Wednesday and it's been read half a million times. A lot of people are clearly concerned about this issue. Maybe now we can start talking about it more openly.https://t.co/cLV5B1vR5A

The public now seems interested both in fatherlessness, and in solutions.

As social pathologies linked to fatherlessness abound, few understand how public policy contributes to the situation. A myriad of special interests, think tanks, party leaders and elected officials formulate public policy, including on the issue of fatherlessness.

On fatherhood, Democrats pursue a laissez-faire policy that there are different types of families and citizens should marry who they want or not marry at all. When campaigning, both Senator Sanders and Secretary Clinton called single mothers “heroines”. Secretary Clinton said:

“Those single moms need even more family support. They need even more of the help that grandparents and aunts and uncles and good friends can provide because, it’s tough, it’s lonely.”

While Republicans feel “the issue should be front and center”, on the National level, they don’t oblige. During the campaign, Leslie Loftis asked “Why Aren’t We Discussing Fatherlessness”, saying:

“For the Republican side, I have a theory: the “War on Women” smear hovers ominously over all Republicans, especially men. Republican politicians have been threatened to within an inch of their funding if they mention anything that could be turned into a sexist trope.”

“Fatherhood and marriage are very interrelated, so we could start with, as a culture, getting married first and then having children, bringing children into a home where there is a mother and a father who are wedded.”

For conservatives, while life begins at conception, fatherhood seems to both begin and end at the altar. As such, most conservative policies are formulated by “marriage experts”, focusing on marriage instead of parenthood.

One such policy is “promoting marriage” where $600 million in spending hasn’t helped: 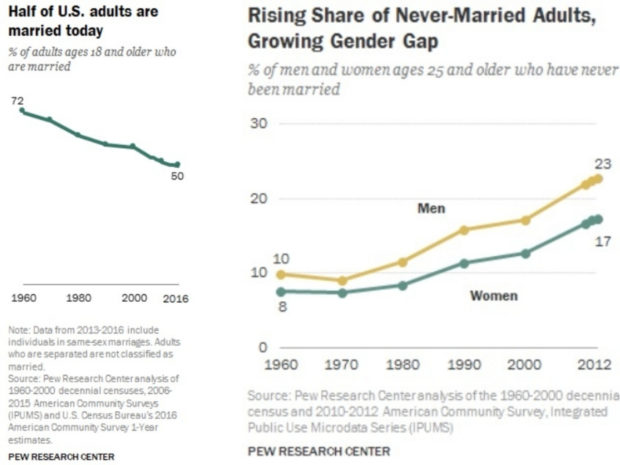 Non-partisan groups provide a straight-forward analysis of these trends. Asked about the decline in marriage rates, Stephanie Coontz, director of research at the Council of Contemporary Families, described:

“a combination of trends – a rise in both the expectations of what marriage means, and the likelihood of divorce – making it a ‘high-risk, high-reward’ situation that some are reluctant to enter.”

Perhaps if public policy didn’t make the risk so high, more would pursue the reward.

“The dramatic rise in the share of never-married adults and the emerging gender gap are related to a variety of factors. Adults are marrying later in life, and the shares of adults cohabiting and raising children outside of marriage have increased significantly.”

What do conservatives tell adults choosing this path? The American Enterprise Institute told movie star Dwayne Johnson to “put a ring on it” after the couple announced their pregnancy.

Certainly, there’s nothing wrong with wanting children in married households as research shows it’s a positive environment for kids. However, it’s clearly remiss to pretend divorce won’t occur, and to not have the best public policy for the children it affects, formulated by experts in child development in non-married households. That expertise is currently lacking in conservative think tanks. What’s seldom known by “marriage experts” is children with shared parenting do almost as well as children in married families, while children without shared parenting do far worse.

At the state level, implementing Shared Parenting is the largest action governments can take to negate fatherlessness. The public’s view on this issue is well documented. A compendium of polls shows overwhelming support for shared parenting with over 70% favorability and consistent support between women, men, Democrats and Republicans.

In the last two sessions, 30 states considered Shared Parenting bills, with Republicans comprising 84 percent of the sponsors in 2017 and 78 percent in 2018. But party support isn’t always distinct with bills in Illinois, Vermont, Massachusetts and North Carolina sponsored by Democrats.

“If you want to make a huge dent in the breakdown of society, make a dent in fatherlessness.”

“If you want to make a dent in all these issues, don’t make a policy, don’t get government involved,” Forest said. “Start to do something about fathers in homes.”

While the lieutenant governor is correct about the social science, does he understand it’s sometimes North Carolina’s government creating the fatherlessness? Sadly, the state gives separating parents a financial incentive to minimize the other parent in their children’s lives. This reprehensible legislation should be changed immediately. Further, it’s North Carolina Democrats working to keep separated fathers in their children’s lives, with Senator Angela Bryant being a stalwart for Shared Parenting.

Some politicians also bow to special interests. In 2013 and 2016, Florida Governor Rick Scott, who in announcing his candidacy for US Senate stated he didn’t know his own father, vetoed shared parenting bills which would have improved fatherlessness. In 2016, Scott’s actions came after the Florida Bar hired “emergency lobbyists”, some who previously worked for the governor.

With overwhelming support from the public, the research and the experts, there’s no justifiable reason shared parenting legislation shouldn’t pass like Kentucky’s recent bill; with a combined vote of 123 in favor and 1 opposed, and with Democrats and Republicans tweeting the news. Governor Bevin signed the law on April 26th, to benefit Kentucky’s children, families and society.

Seven weeks ago, we announced a series on fatherlessness. Articles followed, with actionable suggestions for family courts; schools; child support; companies and the media; fathers, and those shaping policy. Certainly, they can’t all be bad ideas.

“Fatherlessness is as close to destiny as you can get. Politicians, community leaders, clergy and others ignore it at society’s peril, not their own, which is why they avoid it. If there is ever a sustained full-frontal assault on fatherlessness, results will be manifest is less than a decade.”

We’re now experiencing an increasing recognition and growing sense of urgency from legislators to deal with the laws, policies, institutions and ideologies creating fatherlessness. While they’ve waited too long, and let the crisis grow too much, this remains an addressable problem; for now.

Only two questions remain. If not now, when? And if not with current leaders, then with whom?

1
Tucker Carlson Insists Biden 'Will Not Be The Democratic Nominee.' Here's Who He Predicts Will Assume The Mantle
Media
2
NYT Defends Maggie Haberman After Trump Calls Her A 'Third Rate Reporter'
Media
3
Senior WHO Official Cuts Off Interview When Reporter Implies Taiwan Isn't Part Of China
World
4
Trish Regan Out At Fox Business
Media
5
Greg Gutfeld Shreds Hillary Clinton For ‘America First’ Tweet: ‘You Are What Scientists Would Call A Scumbag’
Media