The San Diego Unified School District continued to engage with the Council on American-Islamic Relations (CAIR) to develop an anti-Islamophobia initiative after it had voted to rescind its formal partnership with the Muslim advocacy group, new emails obtained by a legal group representing concerned parents reveal.

The San Diego school board voted in July 2017 to rescind the controversial anti-Islamophobia initiative with CAIR’s chapter in California after parents expressed concern that the initiative was an open invitation for the religious group to revise school curriculum and develop policies that singled out Muslim students for exclusive accommodations.

San Diego school district officials had met with CAIR at least six times after rescinding the initiative in an effort to “continue the momentum” of addressing Islamophobia in district schools, 2,000 pages of emails obtained by the Freedom of Conscience Defense Fund (FCDF) reveal.

The new emails were obtained after the FCDF issued investigative subpoenas to CAIR’s chapter in California as part of its legal effort to shut down the San Diego school board’s anti-Islamophobia initiative.

The same email added that Marten had opened the door once more for CAIR to influence the school district’s curriculum in the area of combatting Islamophobia.

“Cindy indicated that she welcomes the CAIR Committee’s input to the [Anti-Defamation League] curriculum used in the in the district — specifically in regards to teaching about addressing Islamophobia,” the email read.

The San Diego school board issued a formal proclamation in November in support of the San Diego chapter of CAIR, in part to recognize the group’s work in “drafting a well-researched report on school bullying that has been presented to the district.” 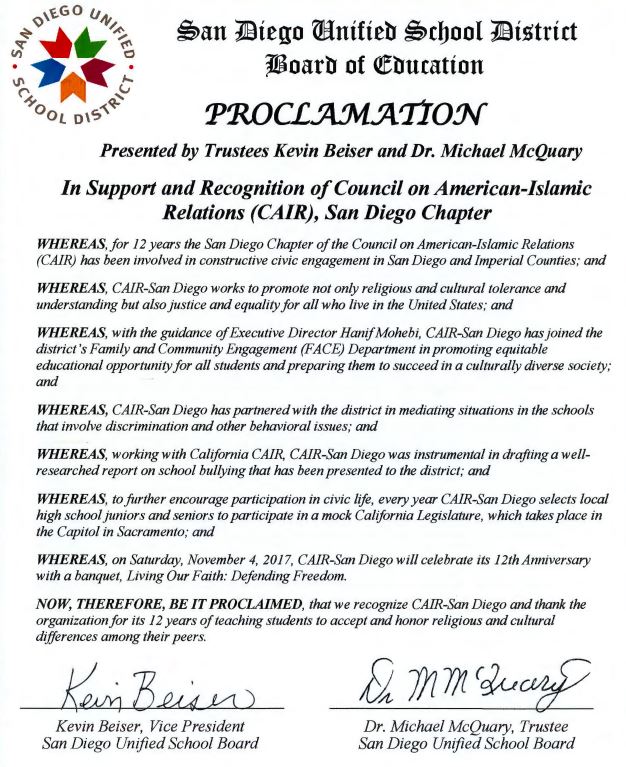 CAIR representatives handed pamphlets to students that advised Muslim youth to contact CAIR if they faced bullying, which according to the Muslim advocacy group includes “insulting comments about Islam.”

Hanif Mohebi, the executive director of CAIR-San Diego, praised the initiative in April 2017 and said it should serve as a model for school districts across the country.

The anti-Islamophobia initiative was prompted by a study conducted by CAIR that found a “plague of Muslim bullying” in San Diego schools.

However, the initiative was solving a problem that didn’t exist, according to the FCDF.

The San Diego school district reported just two incidents of Muslim bullying in all of 2015 and 2016, compared to eight anti-Semitic bullying incidents reported in the same period of time, according to documents reviewed by the legal group.

CAIR argued in a friend-of-the-court brief filed in April that its work with the San Diego school board provided no special benefits to Muslim students. CAIR’s work with the school district was limited to educating staff about Muslim culture and providing materials to the district that could be used to instruct students about Muslims, according to the organization neither of which should be viewed as violations of the First Amendment.

CAIR concluded that the FCDF and the parents it has represented are motivated by “the very anti-Muslim rhetoric that the school district was trying to address.”

The FCDF refuted CAIR’s argument in a response filed Monday, saying it is “pure fiction” that the parents it represents are motivated by anti-Muslim rhetoric. The FCDF said the real issue at hand is that CAIR, an openly religious organization, is actively working with a public school system to promote the religion of Islam.

The San Diego school district developed an “anti-Islamophobia initiative” with assistance from CAIR. This is enough to show the plan violates the First Amendment, according to the FCDF.

The FCDF has previously pointed to comments from CAIR National Executive Director Nihad Awad, who testified before the National Labor Relations Board in 2016 that informing the American public about the Islamic faith is “both a religious and educational exercise.”

“Through deliberate manipulation, CAIR has gained unprecedented power and influence over San Diego Unified’s superintendent and school board,” FCDF President Charles LiMandri said in a statement in March.

“Allowing a radical religious organization to indoctrinate our public schoolchildren defies common sense and undermines the very history and logic of the First Amendment,” he added.