Tuesday night, four-year-old Katharine Alexander was kissed onstage by the President of the United Staes in front of millions watching online and on television.

She was wearing a glittery pink dress.

How did this little adopted girl of a interracial couple end up in the arms of the president in front of a national television audience? The story is a beautiful one.

.@realDonaldTrump kisses 4-year-old Katharine Alexander, who was born with an opioid dependency and was adopted by Lisa & Bruce Alexander (dad holding her) and brought up on stage at the Annual Campaign for Life Gala in Washington. pic.twitter.com/0rVFxhoOsQ

Lisa and Bruce Alexander already have three of their own children. However, they felt “compelled by the Holy Spirit” to adopt late into their parenting years. After what the couple refers to as a “miracle” happened, they were able to adopt Katharine Alexander, days after her birth.

“We had wanted to adopt, but we were both nearing our 50s,” the couple told The Daily Caller.

The couple described how they watched younger couples get calls for adoption and had essentially given up hope. Then, out off the blue, they received a call from their adoption agency.

“We were speechless,” Mr. Alexander said, “A lot of things lined up that were not coincidence. It was meant to be.”

Katharine’s birth mother was addicted to opioids and requested the adoption agency to find her a home. They called the Alexanders, and the couple was at the hospital within hours. The paperwork for Katharine’s adoption flew through the judicial system in a matter of days, a very uncommon thing. Days later, Katharine Alexander was home, in the loving arms of Bruce and Lisa.

The Alexanders have always been pro-life.

They planned on attending the Susan B. Anthony List gala in DC Tuesday night. The group had announced earlier in the month that President Trump would be speaking. The Alexanders sat in the front row. “We were told a couple days ago that Trump was interested in our adoption story, but we had no idea he would invite us onstage,” the couple said. 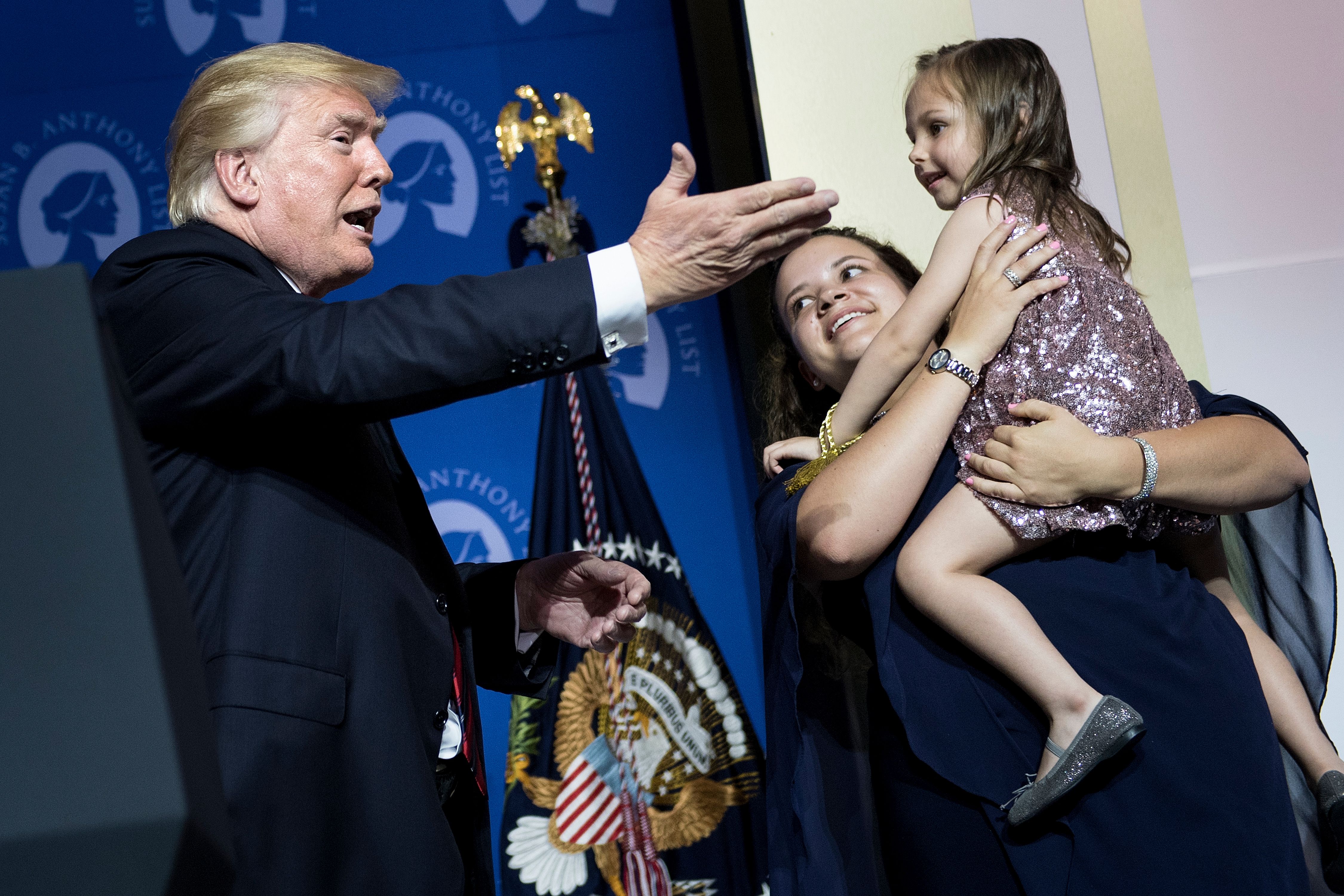 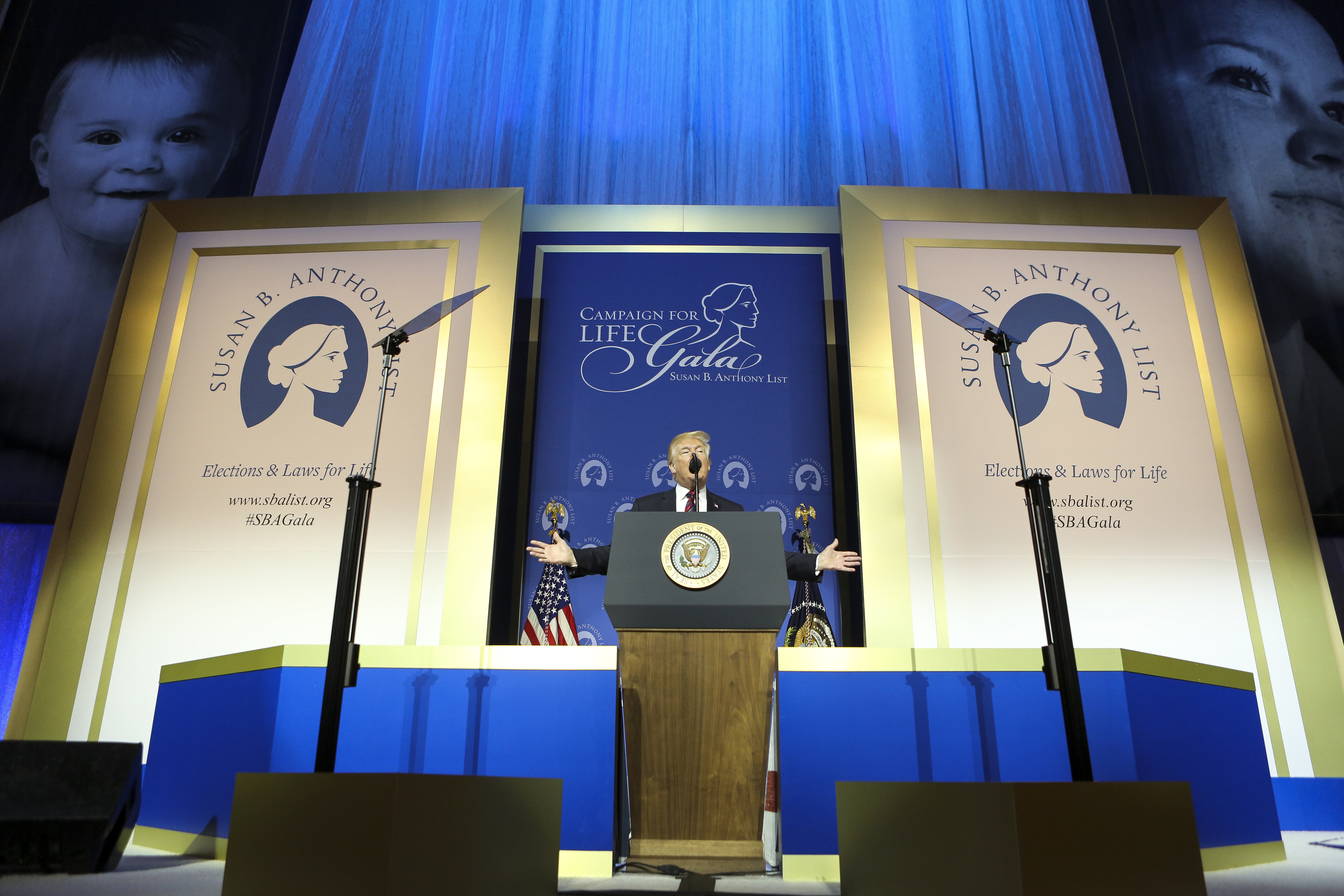 Trump introduced them and their story, and in typical fashion, asked the family to come onstage. The president said:

“Katherine is four years old, and she is full of incredible energy, spirit and talent. At the age of two — come on up, Katherine. She memorized ‘America the Beautiful.’ She recites poetry, and recently she announced to her dad that when she grows up, she wants to be a famous police officer and then when she gets tired of that, she wants to become president.

There was a private moment between the family and Trump as the cameras flashed.

Bruce said the president was far more interested in talking to his daughter. “He was really focused on Katharine,” Bruce said, “Speaking to little kids is a gift. He had a conversation with her. Asked her if she was enjoying her night.”

“Trump is very much his own man,” Bruce continued, “But there is a human side to him. I was there, I’m a father. Us dads really care about our children. He was so real.”

Lisa told TheDC that the adoption aspect of Katharine’s story is no different than any other of her children.

“Katharine is my child,” Lisa said, “Adoption does not set Katharine apart. Every adoption story is special, just like every birth is special. Katharine is not adopted, she is our daughter.”

Katharine told The Daily Caller she wants to be a police officer one day — and then run for president. She then turned to her parents and asked if Trump would still be living in the White House when she is president. “At this rate, that could happen,” Bruce said with a laugh.