A professor who has called Dr. Jordan B. Peterson an “incel” wrote a post Sunday saying that she “will not be silenced.”

Bloomsburg University of Pennsylvania philosophy professor Wendy Lynne Lee seemed not to be aware of the existence of Peterson’s wife and kids when she called him a “misogynist incel” on Twitter. An incel, or involuntary celibate, is shorthand for a man who has trouble attracting sexual partners and often checks out of the dating scene.

Lee deleted her tweet after The Daily Caller News Foundation reached out for comment, but not before TheDCNF took a screenshot of it. 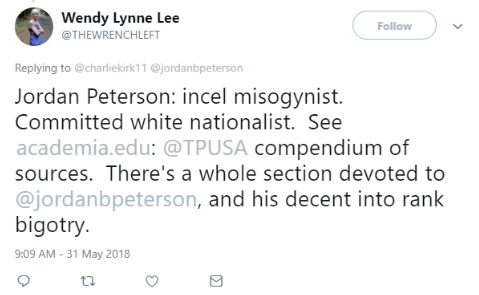 “Jordan Peterson is, as Grant Maxwell puts it beautifully, an ‘intellectual misogynist,'” the professor explained to TheDCNF. “Maxwell shows that Peterson’s reading of Carl Jung is a gross misinterpretation for the sake of pandering to an essentialist and patriarchal worldview: ‘He evidently wants to return to unquestioned patriarchy by paradoxically claiming that “the idea that women were oppressed throughout history is an appalling theory.’ This is an insidious sleight-of-hand in which, by denying that patriarchal oppression ever existed, men can continue to ignore what many women have been saying for centuries.”

The professor noted that Peterson dissuades his followers from engaging with disciplines “he sees as ‘corrupted’ by the supposed evils of feminism, postmodernism, and neo-Marxism” and identifies the Canadian author, as well as Jewish podcast host Dave Rubin, Jewish conservative figures Ben Shapiro and David Horowitz, and right-wing commentator Ann Coulter as “white nationalists sources” in her bibliography.

“It’s clear that [Lee] has decided that it’s entirely acceptable to be careless with her words in relationship to me and my putative beliefs,” Peterson told TheDCNF. “Academics, whose trade-in-stock is words, should know better. She clearly believes (1) that her ill-advised statements are warranted, which they are not, and (2) that such actions, however ill-advised, are acceptable, ethically and factually.”

“It appears that she is taking her lead from articles like the recent New York Times piece that mischaracterized my views on monogamy,” the University of Toronto professor and author of “12 Rules for Life: An Antidote to Chaos” continued. “It is not obvious at all where she has acquired the evidence for my existence as a ‘white nationalist source,’ since no such evidence whatsoever exists anywhere. I would counsel those who wish to bring forward such groundless accusations to be duly cautious. Such shots in the dark have a nasty habit of backfiring.”

The Bloomsburg professor previously posted on Twitter “message to the haters: The Flag Will Hang in Distress in my office window until the Trumpian fascists resign,” referring to an American flag she has hung upside down in her office window, which overlooks the school’s quad, since President Donald Trump’s election victory in November 2016.

Bloomsburg student and Marine veteran John Fromille noticed the upside down flag, as well as signs reading “Biggest s***hole in the world is Donald Trump’s racist soul” in Lee’s window in March. Fromille took a picture of the professor’s display and wrote on Facebook in a post that subsequently went viral that Lee has the right to hang the paraphernalia, but distinguished between teaching and indoctrinating students, calling this latter method a “blatant and flagrant abuse of power.”

Lee asserted that she had two meetings with Bloomsburg administrators in a June LinkedIn post entitled “I Will Not Be Silenced: The Vital Work of Free Expression in the Academy in the Education of Free Citizens.” The first unnamed official allegedly told the professor that her signs could impair the university’s recruitment efforts, urging her to adopt an “alternative form of dissent” but letting her know that he “respected [her] right to free speech.” The second administrator purportedly informed Lee that if Bloomsburg rejected the philosophy department’s request to hire a new faculty member, he would be “pissed” because it be as a result of Lee’s actions. The professor still refuses to take down the upside down flag and has also advocated flag-burning.

“There are no objective facts supporting the claim that my flag protest has resulted in a reduction of freshman enrollment,” Lee told TheDCNF. “Enrollment across PASSHE has been on the decline for several years due to reasons mostly demographic and due to lack of adequate state funding thanks to the previous Republican administration.”

Aside from the president, Lee has attached the label of “alt-right” to outlets and organizations like college watchdog Campus Reform and student organization Turning Point USA, which lists as its mission “to educate students about the importance of fiscal responsibility, free markets, and limited government” and has minority members like Candace Owens, who serves as the group’s director of urban engagement.

She branded the GOP “white nationalist,” explaining that professors are largely not attracted to the party because they are “not racist, misogynist, climate change denying, science-hating homophobes” and “believe in TRUTH.”

Asked to explain her association of Turning Point with the alt-right, Lee linked TheDCNF to a blog post repudiating the campus organization for its publication of its Professor Watchlist, which documents college professors who allegedly discriminate against right-wing students and perform left-wing indoctrination in the classroom.

Lee, who authored “Contemporary Feminist Theory and Activism: Six Global Issues,” reportedly has not stood for the Pledge of Allegiance, which she terms a “compulsory loyalty oath,” since 1976, when she was 16 years old.

“I am among my country’s most devoted patriots,” Lee told TheDCNF. “The patriot is she who takes the promise of her democratic republic seriously, and thus acts as the citizen must when that promise is endangered. Donald Trump is a tyrant who takes himself to be above the law, and who actively stokes misogynist and racist sentiment. He works actively to undermine our relationships with our allies all the while he cavorts with dictators and butchers.”

“He tears children away from their mothers, a crime recently condemned by the United Nations,” she continued. “He denies the human contribution to the greatest threat faced by humanity: climate change. I hang the American flag upside down as a signal of the distress my country now endures under a president who has betrayed his fellow citizens, who takes America to be an opportunity for profiteering at the expense of its democratic institutions and its moral leadership.”