Scientists at the Scripps Institution of Oceanography recorded the warmest sea surface temperature taken in 102 years off the school’s pier in Southern California.

Scripps researchers recorded a high of 78.6 degrees Fahrenheit on Wednesday after a sting of daily sea surface temperature records off the pier. The researchers were quick to claim, “This is how global warming will play out,” according to a press release.

“It surpassed the previous record of 78.4°F (25.8°C) set on July 30, 1931 during an unusually warm period that year,” reads the Scripps release touting the new record temperature reading.

“Records related to heat and intense weather will become easier to break having been given a boost from anthropogenic climate change that has added about [one degree Celsius] to ocean temperatures over the past century,” scientists said, according to the release.

But while Scripps is trying to tie the record-high ocean reading to the broader wave of media coverage on global heat waves, there are a few caveats to note about what the scientists found. (RELATED: Was The Record-Setting Temperature Reading At Death Valley Contaminated By ‘Solar Panels And RVs’?)

First, these measurements are taken from a pier that’s near the shoreline, which would not necessarily make it representative of the entire Pacific Ocean, and therefore easily influenced by local weather events. The “anomalously warm temperatures for the past week” that Scripps researchers observed at their pier somewhat mirror the temperature pattern in 1931, and indeed, the daily records broken in the past week have been very close to readings from 87 years ago.

There is an upward trend in temperature readings from Scripps’ pier, but the trend seems to also broadly coincide with the flipping of a natural ocean cycle, the Pacific Decadal Oscillation, to its warm phase. That flip occurred around 1976. 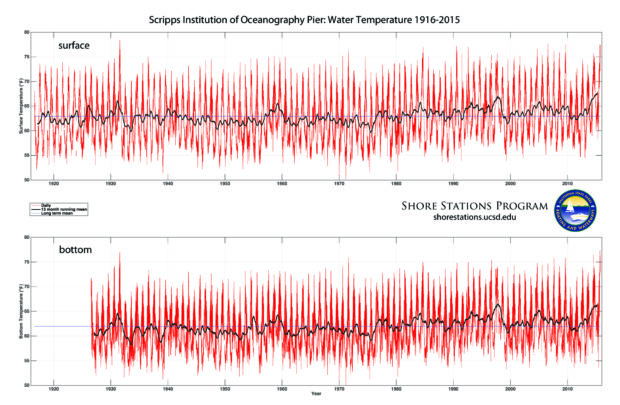 Source: Scripps Institution of Oceanography at the University of California San Diego

Also, the scientists themselves admit there’s lingering heat from the incredibly strong El Nino that peaked in 2016. Pacific Ocean temperatures don’t seem to have returned to normal in El Nino’s wake — in fact, forecasters say there’s a 65 percent of an El Nino forming this fall.

“It looks like we took a step up during 2014-2016 from which we have not completely recovered,” Scripps oceanographer Reinhard Flick said in a statement.

Scripps has been measuring sea surface temperatures and salinity off its pier since August 1916, and the school began gathering sea floor data in 1925. Scripps still takes temperature measurements off its pier by hand, but in that time the technology used to log readings has changed dramatically.