The New York Times sparked a social media ruckus when it reported the Environmental Protection Agency’s (EPA) proposal to replace Obama-era coal plant regulations could lead to as many as 1,400 premature deaths a year from air pollution.

The New Republic warned: “Trump’s EPA admits the dire human impact of its own climate rule.”

So could EPA’s plan to replace the Clean Power Plan end up causing 1,400 more premature deaths a year from air pollution?

Well, it depends on what part of EPA’s regulatory analysis is used. At the end of the day, EPA is just estimating premature deaths based on current epidemiological studies that are still the subject of debate.

TheNYT reported the scenario EPA “pegged as the most likely to occur, the health effects would be significant.” EPA “predicts its plan will see between 470 and 1,400 premature deaths annually by 2030 because of increased rates of microscopic airborne particulates known as PM 2.5,” according to TheNYT.

However, TheNYT’s figure comes from EPA’s estimates of premature deaths in 2030 based on one 2012 study. TheNYT seemed to ignore the other 2009 study EPA used to estimate PM2.5 deaths and the alternate methodologies.

Most of the benefits from reducing air pollution come from estimated avoided deaths from less PM2.5, which EPA says can cause lung disease and even premature death. So, this figure is key to determining the financial benefits of air quality rules.

When it comes to ACE, EPA laid out different methods of estimating premature deaths from PM2.5 in 2030. TheNYT based its reporting on just one of those estimates based on a 2012 study and using a linear no-threshold model.

The linear no-threshold model is used by EPA and other regulatory agencies to set air quality standards, but it’s long been challenged by some scientists who say it’s not accurate, especially for use in radiation regulations.

However, EPA also estimated mortality from a 2009 study. Using the 2009 study, the estimated PM2.5 deaths is more than halved, from between 470 and 1,400 to between 280 and 550. (RELATED: Warren Can’t Answer Simple Question On DNC Fossil Fuel Donations)

Agency officials also estimated mortality based on the assumption of no deaths below the “lowest measured levels” (LML) in the 2012 and 2009 studies. 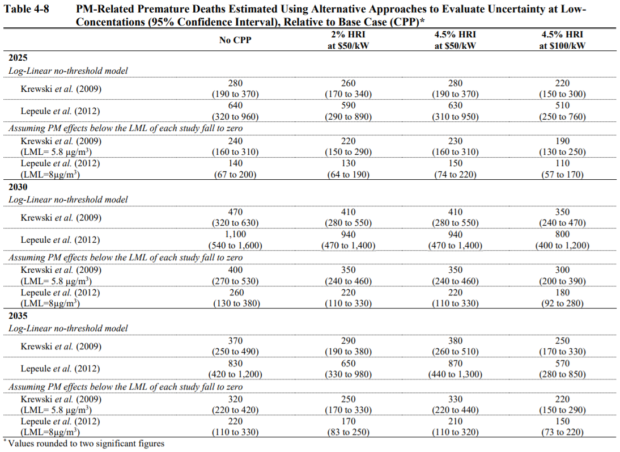