John Goodman hinted that his character in the “Roseanne” spin-off “The Conners” will be “mopey and sad because his wife’s dead.

“The Conners” will launch without Goodman’s former co-star Roseanne Barr, after she tweeted something racist about former Obama aide Valerie Jarrett. ABC then canceled “Roseanne” and fired Barr.

“It’s an unknown,” the 66-year-old actor shared with the U.K. Sunday Times, according to Entertainment Tonight. “I guess he’ll [Dan Conner] be mopey and sad because his wife’s dead.” (RELATED: Roseanne Barr ‘Disgusted’ By Stars Throwing Support To James Gunn After ‘Blacklisting’ Her) 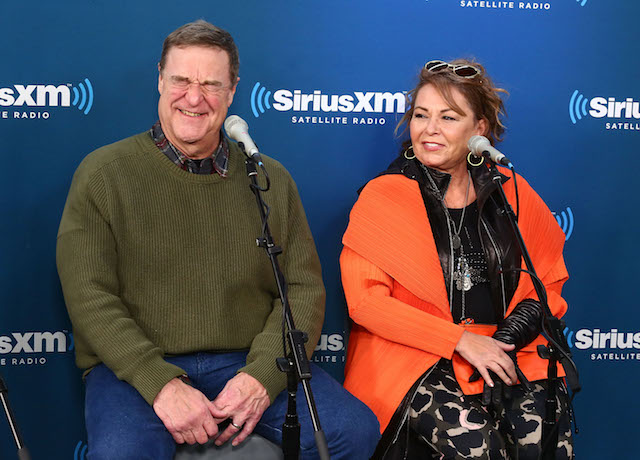 Actors John Goodman and Roseanne Barr speak during SiriusXM’s Town Hall with the cast of Roseanne on March 27, 2018 in New York City. (Photo by Astrid Stawiarz/Getty Images for SiriusXM)

Goodman said that Barr is “still going through hell.”

“She had to sign a paper saying that she relinquished all her rights to the show so that we could go on,” Goodman explained. “I sent her an email and thanked her for that. I did not hear anything back, but she was going through hell at the time. And she’s still going through hell.”

Later, he talked about what he thought made the “Roseanne” series popular.

“There’s not a lot of people scraping by on television,” the actor shared. “[The Conners] love each other very much and that’s what gets them through, the humor and the love.”

According to a synopsis about the upcoming spin-off, “After a sudden turn of events, the Conners are forced to face the daily struggles of life in Lanford in a way they never have before. This iconic family — Dan, Jackie, Darlene, Becky and D.J. — grapples with parenthood, dating, an unexpected pregnancy, financial pressures, aging and in-laws in working-class America. Through it all, the fights, the coupon cutting, the hand-me-downs, the breakdowns — with love, humor and perseverance, the family prevails.”

Barr has apologized for the comment about Jarrett that she insists was a “misunderstanding.”

“If she is watching, I am so sorry you thought I was racist and you thought my tweet was racist. Because it wasn’t. It was political. I am sorry for the misunderstanding that [was] caused [by] my ill-worded tweet,” Barr said during an appearance on the “Sean Hannity Show” on Fox News last month.

“I am sorry that you feel harm and hurt,” she added. “I never meant that and for that I apologize. I never meant to hurt anybody or say anything negative about an entire race of people, which I think 30 years of my work can attest to.”

1
EXCLUSIVE: Coronavirus Expert Says Virus Could Have Leaked From Wuhan Lab
Investigative Group
2
Tucker Questions Severity Of Shutdown Strategy: What If 'We'd Adopted A More Conventional Response To This Epidemic?'
Media
3
'Wrong In Every Way': Trump Sends Vicious Letter To Chuck Schumer Over Coronavirus Response
Politics
4
Reporters Express Frustration After OANN's Chanel Rion Attended Briefing Despite Being Kicked Out For Violating Social Distancing Rules
Media
5
They Attacked Trump For Touting 'Unproven Drugs,' Now The NYT Is Reporting It Can Help With Coronavirus
Media