Some Democrats in Congress quickly used a New York Times op-ed written by an anonymous official in President Donald Trump’s administration to demand his cabinet remove him from office via the 25th Amendment, which the official claims was briefly whispered about in Trump’s cabinet.

The op-ed, titled “I Am Part of the Resistance Inside the Trump Administration,” claimed that “many of the senior officials in his own administration are working diligently from within to frustrate parts of his agenda and his worst inclinations.”

The official claimed that “there were early whispers within the cabinet of invoking the 25th Amendment” but that “no one wanted to precipitate a constitutional crisis.” (RELATED: Prominent Democrats Keep Destroying Norms To Go After Trump)

The 25th Amendment allows the president’s cabinet to remove the president from power and replace him with his vice president, if the cabinet deems him unfit to carry out his duties. The amendment has only been used three times, all of which were precautionary measures as the president underwent a medical operation.

If Trump were to object his cabinet removing him from office, then two-thirds of both the House and the Senate would have to vote in favor of his removal.

The push to remove Trump via the 25th Amendment has previously been described as a “left-wing liberal fantasy,” but that didn’t stop Democrats from using Wednesday’s op-ed to renew their efforts.

Democratic California Rep. Jackie Speier wrote on Twitter that the anonymous official and “colleagues of like mind must come forward to Congress.”

“We cannot afford to allow [Trump] to use his impulsive instincts and send us to another war! Your duty is to the country, not an unfit and unstable [president],” Speider added, concluding her post with the hashtag, “#25thAmendmentNow.”

Democratic Maryland Rep. Jamie Raskin touted a bill he previously introduced that would establish a body of “elder statesmen” to determine the president’s fitness for office in coordination with the vice president.

“I urge my colleagues in Congress to join me in cosponsoring this bill, which is of pressing and enduring importance to the security of our nation,” Raskin said in a statement.

Other Democrats similarly touted the op-ed.

Democratic Rep. Sheila Jackson Lee of Texas speculated without evidence that the op-ed author was Vice President Mike Pence and posted a poll asking her followers for their guesses. 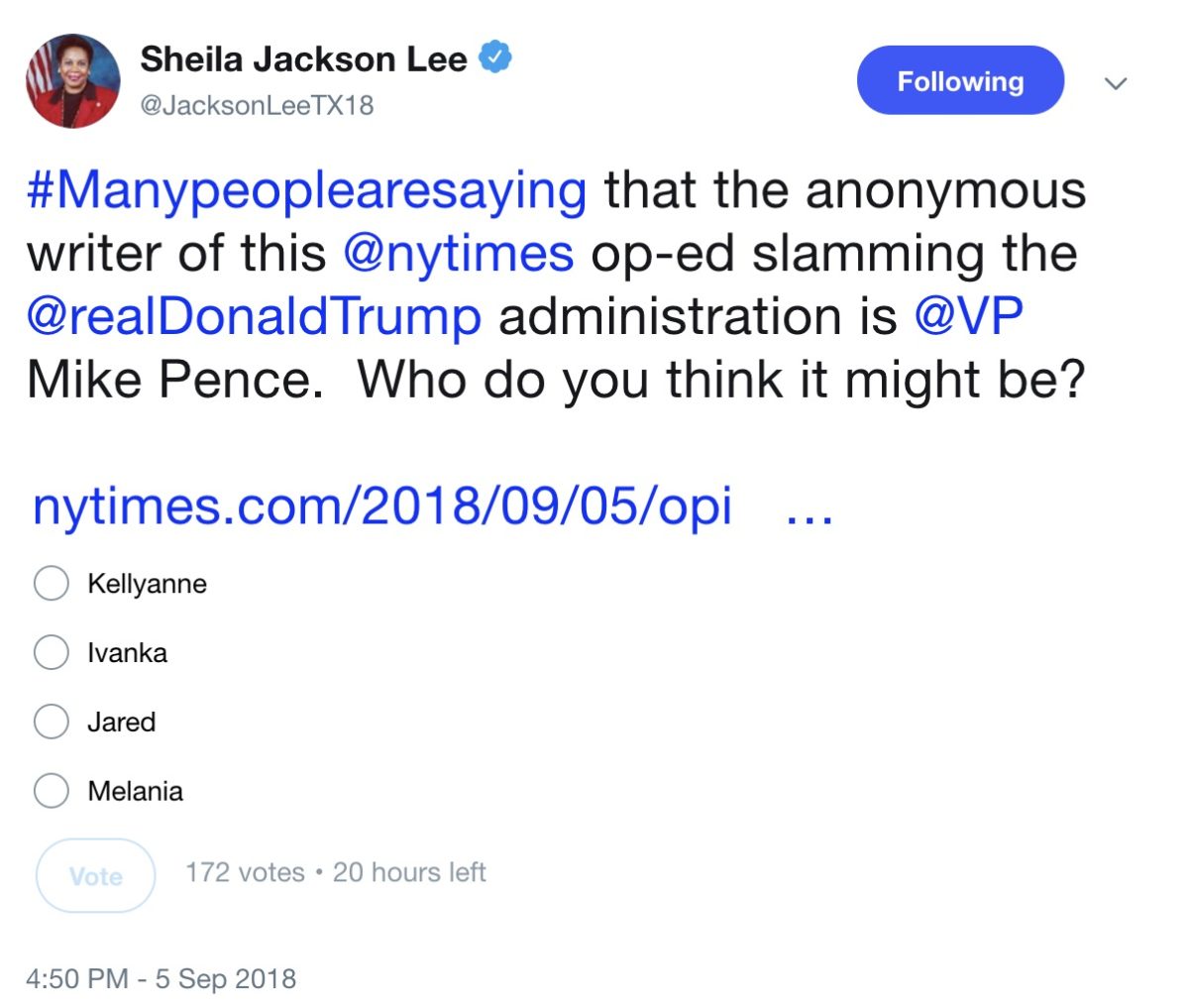 “All jokes aside, who is making the decisions in Trump’s White House? Do unelected staff have more power than the President?” asked Democratic Rep. Judy Chu of California. “This is a real constitutional crisis that demands oversight from Congress.”