President Donald Trump flew down to North Carolina to visit areas ravaged by Hurricane Florence on Wednesday, about five days after the storm struck the area.

Trump departed Washington, D.C., on Air Force One Wednesday morning, landing at Marine Corps Air Station Cherry Point in North Carolina. The Marine Corps base is close to areas ravaged by Hurricane Florence, which made landfall on Friday. 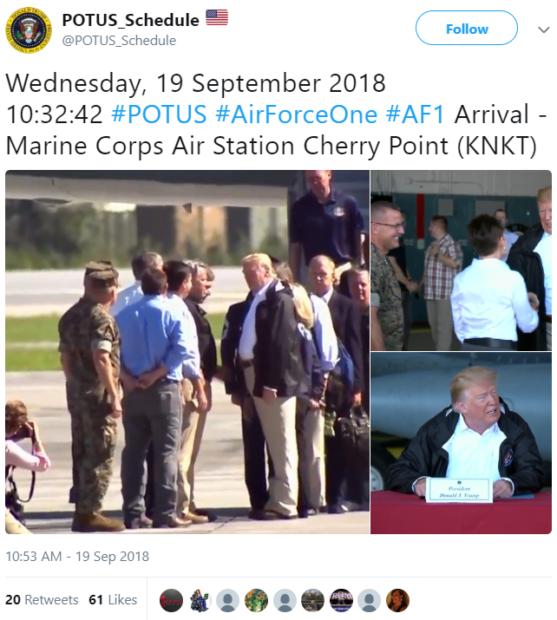 Florence brought record rainfall to North Carolina and South Carolina, dumping about 11 trillion gallons of rain on both states. The storm caused massive flooding, left hundreds of thousands without power and, so far, resulted in 32 deaths.

“This is a tough hurricane. One of the wettest we’ve ever seen from the standpoint of water. Rarely have we had an experience like it, and it certainly is not good,” Trump said in a video address released Tuesday evening. (RELATED: Let’s Debunk The Misleading Claims About Hurricane Florence And Global Warming)

“There’s been a loss of life and may god be with them and their families. That’s a tough one. It’s tough to understand, but this has been a really difficult period of time for a lot of people,” Trump said.

Trump is also expected to visit Myrtle Beach, South Carolina, where Florence brought heavy rainfall and knocked out power for thousands of residents. However, infrastructure and buildings largely remained intact when Florence hit.