Meghan Markle really opened up about a few of the special touches she added to her wedding attire for her royal wedding in May to Prince Harry.

“My goodness. Amazing isn’t it?” Markle shared as she reacts to seeing her Givenchy wedding dress for the first time since her May 19 wedding in an upcoming documentary about Queen Elizabeth II called “Queen of the World,” according to Entertainment Tonight Monday. “Beautiful.” (RELATED: Celebrate Prince William’s Birthday With Unforgettable Shots Of Kate Middleton [SLIDESHOW]) 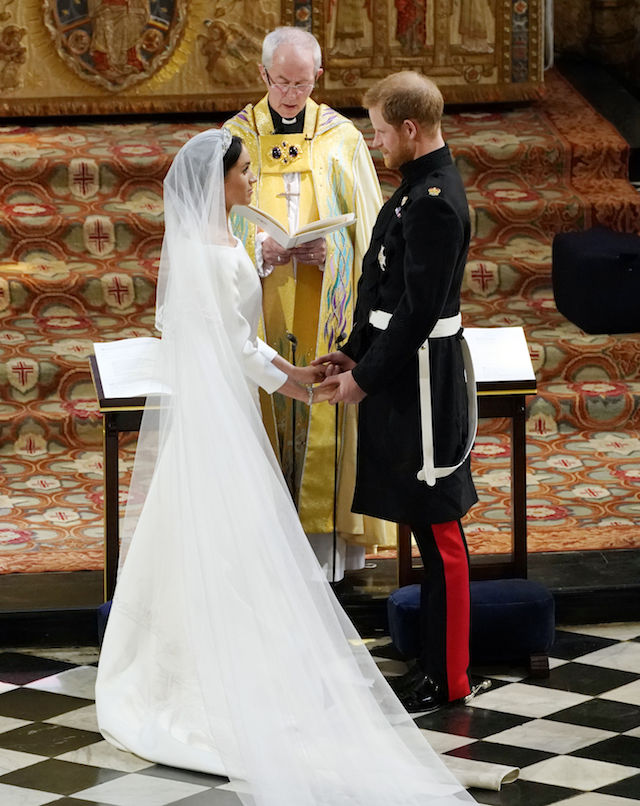 Prince Harry and Meghan Markle exchange vows during their wedding ceremony in St George’s Chapel at Windsor Castle on May 19, 2018 in Windsor, England. (Photo by Owen Humphreys – WPA Pool/Getty Images)

The comments came from Meghan as curators of the Royal Collection Trust prepare to put her wedding gown on display for the new exhibition.

“Somewhere in here there’s a piece of — did you see it?” the 37-year-old former “Suits” actress explained. “The piece of blue fabric stitched inside. It was my something blue. It’s fabric from the dress I wore on our first date.”

She then talked about the intricate designs in her bridal veil that contain a flower marking each of the 53 commonwealth countries. However, she included a few other surprises, one which was a California poppy flower, because that’s where she’s “from” and Wintersweet which grows outside of her and her husband’s Nottingham cottage.

“When people come they can find their flower,” Markle shared. “There are so many different, beautiful features there. I think also with Harry’s role as youth ambassador for the commonwealth, it was so important for us to have a spirit of inclusivity in the wedding.”

“I stuck in a couple of flowers that were important to me as well, personally,” she added “But there is a California poppy in there, which has nothing to do with the Commonwealth, but it is where I’m from.”

“Queen of the World” hits the air Monday night on HBO.