A Brooklyn woman hired two maids that reportedly trashed her home, drank her liquor, broke her belongings and passed out on the kitchen floor.

Genevieve Snow, 29, was contacted via email by a representative, Joanna Oltuszewska, at a cleaning service by the name of “Joanna’s Cleaning Service,” who provided Snow with information about the company’s services.

Snow was told that maids would clean her apartment while she went to work for the day. Snow paid in cash, as Oltuszewska requested, and gave a very generous tip, which was her first mistake.

Snow arrived home from work at 5:30 p.m. to one of the maids face-down on her kitchen floor, drunk, while the other maid had long escaped, having stolen Snow’s keys, according to The New York Post.

As Snow explained, “I hired two ladies from Joanna’s Cleaning Service in Brooklyn, and they didn’t clean a thing — just drank all my liquor and f**ked up my home.”

Snow left the scene and called police. Once the police arrived, what they witnessed was beyond belief: “[The maid] is licking ice cream and hammered — beyond hammered. She drank one whole bottle of Broker’s Gin and [most of] a bottle of Kettle.”

NYPD handled the matter by sending the intoxicated maid to Woodhull Hospital and advised Snow to “take it to civil court”. 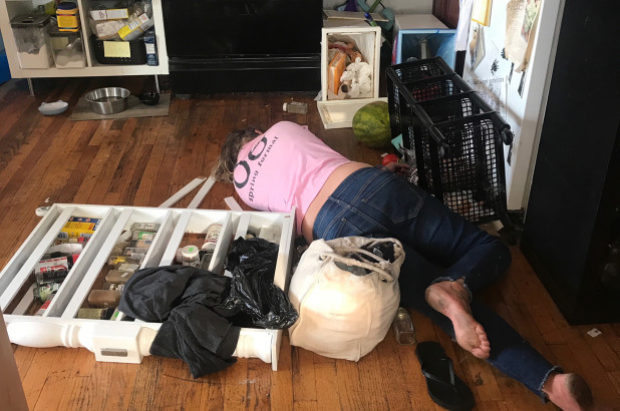 Snow took to Facebook on October 1 to share photos of her messy apartment, broken table, empty bottles of liquor and the unprofessional-looking maid, hammered on her kitchen floor. She also included back-and-forth email conversations with the representative, Oltuszewska, apologizing for the situation saying, “This situation not supposed to happen and this girl is fired already.”

Oltuszewska continued with a lengthy email, explaining to Snow that the maid sent to her apartment was very emotional that day dealing with her husband leaving her after 19 years of marriage and also finding out her teenage daughter was pregnant.

While Snow did not give in to the sympathy, she sent Oltuszewska a bill for damage costs and an emergency locksmith for her stolen keys, with the total coming to over $400. When Oltuszewska refused to pay it, saying they don’t do refunds, Snow threatened to bring in authorities and take her to court.

After inputing bad reviews on Facebook, and Yelp, Oltuszewska left a comment on the Yelp review, insisting she had no idea who the woman in the pictures was and that she did not work for her cleaning service anymore, suggesting that the maid possibly had created a rivalry cleaning service under the same name and scammed Snow.

Snow failed to find any real information about this cleaning service and her attempt to file a lawsuit against the business did not go as expected, as she was led to fake addresses and never recieved any responses to her emails.