American pastor Andrew Brunson met with President Trump in the Oval Office on Saturday, just one day after he was released from a two-year imprisonment in Turkey.

As the two sat together, Trump congratulated the North Carolina pastor and thanked Turkish President Recep Tayyip Erdogan for his role in Brunson’s release.

President @realDonaldTrump with Pastor Brunson: “We’ve been negotiating long and hard. We do not pay ransom in this country, at least any longer.” https://t.co/fAJKg7DyKv pic.twitter.com/0Xqc3KgZGw

“This is a time to thank the administration and people in government who supported us,” Brunson told reporters. “We love this country. Last night we arrived in Germany on a plane that President Trump sent to take us from Turkey. And the Ambassador to Germany met us there at 1:30 in the morning, I couldn’t believe it. And he had an American flag to give us that had flown over the embassy in Berlin. And I took it and I very naturally just, I kissed it.”

“I love this country and we pray for this country,” Brunson said, visibly holding back tears. (RELATED: Pastor Brunson Prays Over President Trump In Oval Office — ‘Fill Him With Your Wisdom And Strength And Perseverance’)

Pastor Andrew Brunson: “Last night we arrived on a plane that @POTUS sent to take us from Turkey. And [@RichardGrenell] met us there at 1:30 in the morning, I couldn’t believe it. And he had an American flag to give us…I kissed it.” https://t.co/fAJKg7DyKv pic.twitter.com/JPLh84P5Qc 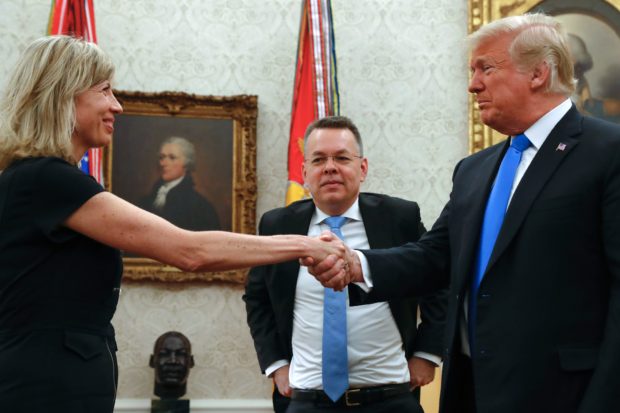 Freed American pastor Andrew Brunson (C) looks on as his wife Norine shakes hands with US President Donald Trump after a meeting in the Oval Office at the White House in Washington, DC, October 13, 2018. – Brunson, held for two years in Turkey, returned to the US earlier Saturday after a court freed him in a case that sparked a crisis in Ankara’s ties with Washington and trouble for its economy. The court in the western town of Aliaga convicted Brunson on terror-related charges and sentenced him to three years, one month and 15 days in jail. (Photo by ROBERTO SCHMIDT / AFP) (Photo credit should read ROBERTO SCHMIDT/AFP/Getty Images)

Brunson was arrested in October 2016 and accused of aiding terrorists through a church he and his wife operated. He was convicted and sentenced to three years in prison but was released for time served and allowed to leave Turkey, returning home on Friday. (RELATED: Pastor Andrew Brunson Kisses American Flag After Being Freed)