Delivering remarks at the University of Minnesota Law School, Roberts opened by alluding to Kavanaugh’s confirmation. He noted that the justices shake hands with one another before entering the courtroom for oral argument or gathering for private conferences, in keeping with a tradition established by Chief Justice Melville Fuller, who led the Court from 1888 to 1910.

“It’s a small thing, perhaps, but it is a repeated reminder that, as our newest colleague put it, we do not sit on opposite sides of an aisle, we do not caucus in separate rooms, we do not serve one party or one interest, we serve one nation,” the chief said, referencing remarks Kavanaugh made during his ceremonial installation at the White House.

“I want to assure all of you that we will continue to do that,” Roberts added.

He declined to expressly condemn the confirmation process, however, out of deference to the popular branches of government. Though Supreme Court justices are often asked about their confirmations in public, they usually couch their answers in general terms to avoid being seen as unduly partisan. (RELATED: Supreme Court Weighs Trump Administration’s Power To Detain Criminal Migrants)

“I will not criticize the political branches,” Roberts said. “We do that often enough in our opinions. What I would like to do is emphasize how the judicial branch is and must be very different.” 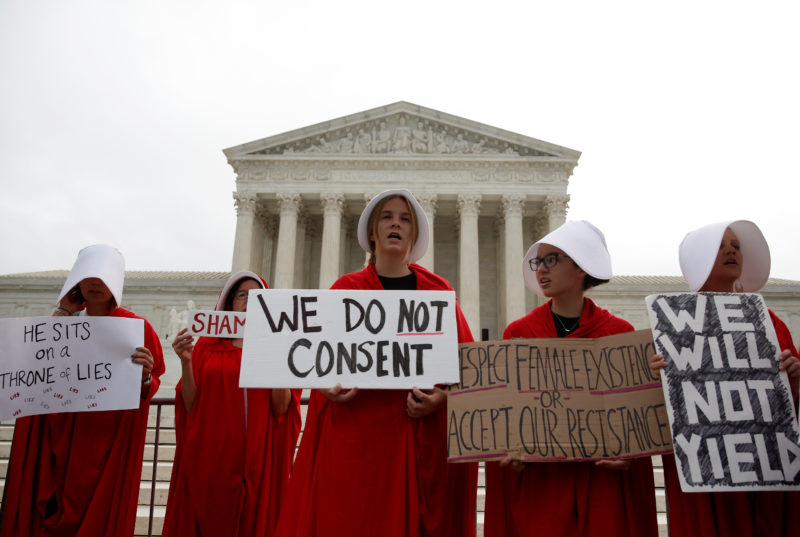 Protesters demonstrate on first day with newly sworn in Associate Justice Brett Kavanaugh on the court at the Supreme Court in Washington, October 9, 2018. REUTERS/Joshua Roberts

Roberts explained that some of the Court’s finest moments came when it was at odds with public opinion. He specifically named Brown v. Board of Education and West Virginia v. Barnette, a 1943 decision which found schools cannot oblige students to recite the pledge of allegiance, as examples.

Kavanaugh participated in a session at the high court for the first time on Oct. 9. Normalcy prevailed despite the recent tension, as Kavanaugh and his new colleagues seemed in especially good spirits.