Farrakhan, the leader of the Nation of Islam, tweeted out a video of himself giving a speech on Sunday in Detroit to mark the 23rd anniversary of the Million Man March.

During the event, Farrakhan said, “To the members of the Jewish community that don’t like me, thank you very much for putting my name all over the planet … I’m not mad at you, ’cause you’re so stupid.”

Just in from a @Twitter spokesperson: Louis Farrakhan’s tweet comparing Jews to termites is not in violation of the company’s policies. The policy on dehumanizing language has not yet been implemented.

So if you want to compare Jews to rats/insects – get it in while you can!

“So when they talk about Farrakhan, call me a hater, you know they do, call me an antisemite — stop it! I’m anti-termite! I don’t know nothing about hating somebody because of their religious preference,” he continued.

It did not break the social media site’s community rules, according to Joe Bernstein, a Buzzfeed News writer, who reportedly spoke with a Twitter representative. (RELATED: Twitter: Saying Dana Loesch’s Kids Need To Be Murdered Does Not Violate Rules)

At the end of September, Twitter announced they were going to expand their guidelines to include “dehumanizing speech.” The policy prohibits “content that dehumanizes others based on their membership in an identifiable group, even when the material does not include a direct target.”

Despite the new policy, Bernstein reported that this policy has not gone into effect, making Farrakhan’s video acceptable. 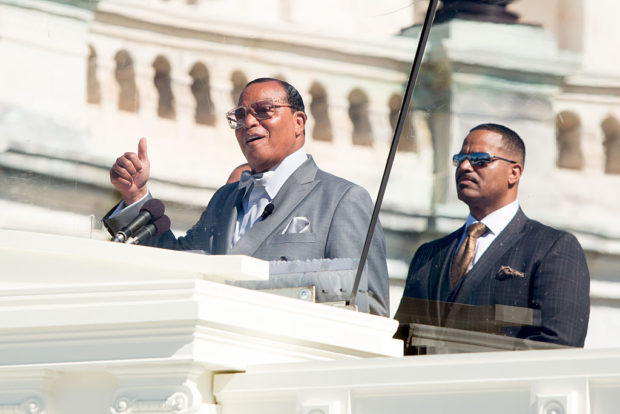 WASHINGTON, DC – OCTOBER 10, 2105: Minister Louis Farrakhan speaks from behind a bullet-proof shield on the West Front of the U.S. Capitol building for “Justice or Else,” a rally held to commemorate the 20th anniversary of the Million Man March on October 10, 2015 in Washington, D.C. The rally organized by Nation of Islam leader Louis Farrakhan incuded speakers from the 1995 rally and current civil rights leaders. (Photo by Allison Shelley/Getty Images)

Even without the new policy, Farrakhan’s tweets could violate Twitter’s hateful conduct standards, which says, “You may not promote violence against, threaten, or harass other people on the basis of race, ethnicity, national origin, sexual orientation, gender, gender identity, religious affiliation, age, disability, or serious disease.”

Farrakhan has a long history of anti-Semitism and preaching homophobic and anti-white sentiment.