Within days of a video emerging that showed anti-communist protesters in Florida shouting down House Minority Leader Nancy Pelosi, conservative leaders condemned the mob-like tactics used by the right-wing activists.

“This is wrong. It should not happen — to Rs or Ds,” said Republican Sen. Ben Sasse of Nebraska on Twitter Friday. “And it would be useful if more journalists reported that some House and Senate Democrats have been repeatedly urging the public to do this to Republicans.”

A crowd of protesters shouted profanities at Pelosi as she was on her way to meet with Democratic leaders and activists on Wednesday. In the now-viral video, anti-communist protesters can be heard yelling “Look at Nancy Pelosi right here — f***ing communist.” (RELATED: Antifa Sends Threatening Message To Ted Cruz After Disrupting His Dinner: ‘You Are Not Safe’)

“These people are acting like morons and their behavior is a total disgrace,” said Buck Sexton, the HillTV host and conservative commentator. “They’ve also done a big favor for Antifa and the mob mentality on the Left, and now we get to hear about ‘both sides.'”

These people are acting like morons and their behavior is a total disgrace.

They’ve also done a big favor for Antifa and the mob mentality on the Left, as now we get to hear about “both sides” having this problem. https://t.co/jYp5SBQjET

Leaders on the left have had different messages, however. Democratic Rep. Maxine Waters of California has vocally called for harassing officials working for Trump’s administration and Democratic Sen. Cory Booker of New Jersey recently demanded his constituents “get up in the face of some congresspeople.”

“I don’t agree with Nancy Pelosi’s agenda, but this is absolutely the wrong way to express those disagreements,” said Rep. Steve Scalise of Louisiana. “If you want to stop her policies, don’t threaten her, VOTE! That’s how we settle our differences.” (RELATED: Steve Scalise Calls Out Colleagues For Not Condemning Political Violence) 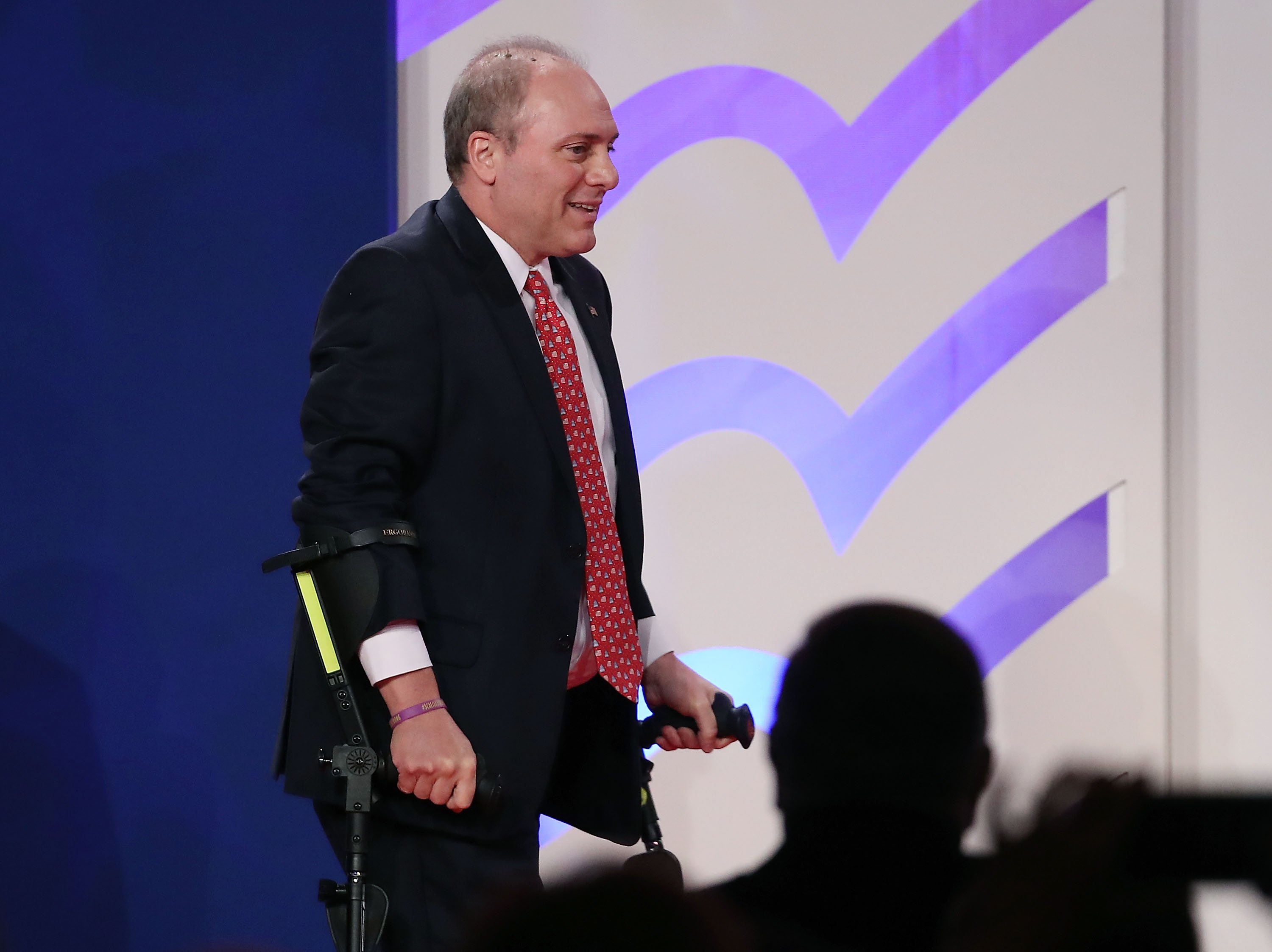 House Majority Whip Steve Scalise (R-LA), walks on stage to speak during the annual Family Research Council’s Values Voter Summit at the Omni Shorham Hotel on October 13, 2017 in Washington, DC. Scalise is still recovering from being shot in June at a congressional baseball team practice in Alexandria Virginia, (Photo by Mark Wilson/Getty Images)

Scalise, who was notably the subject of an assassination attempt after a left-wing activist opened fire while Republicans were practicing for the annual Congressional Baseball Game, has been a vocal opponent of mob-like tactics in politics. In September, he criticized his Democratic colleagues for not condemning members of their own party who participate in the upheaval.

“Very much agree,” Sen. Ted Cruz replied to Loesch. “We should be happy, joyful warriors.”

Cruz experienced the left-wing mob first-hand recently. Cruz was dining in September with his wife, Heidi, when a large crowd of protesters flooded the restaurant shouting “we believe survivors,” referring to allegations of sexual misconduct against Justice Brett Kavanaugh. The Texas senator was also shouted out on Tuesday while he was in the airport.

“Disagree on substance, yes. Focus on facts, yes. But treat each other with civility and decency,” Cruz continued. “Respect each other’s humanity.”