Despite an overall increase in the NFL’s television ratings, NBC’s “Sunday Night Football” dropped 25 percent in one week to hit a season low.

The 45-10 victory of the Kansas City Chiefs, led by quarterback Patrick Mahomes, against the Cincinnati Bengals scored the network the lowest rating of the year in early metrics, with an 11.0/19 in metered markets, according to Deadline Monday. (RELATED: NFL Ratings Tank–Worst Viewership In Nearly Two Decades) 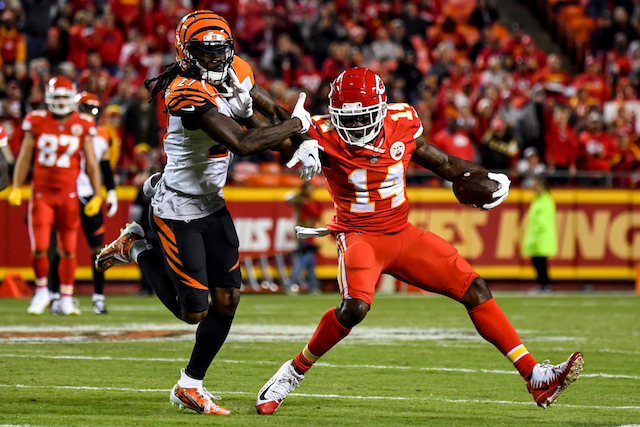 Sammy Watkins #14 of the Kansas City Chiefs stiff arms Dre Kirkpatrick #27 of the Cincinnati Bengals during the first half of the game at Arrowhead Stadium on October 21, 2018 in Kansas City, Kansas. (Photo by Peter Aiken/Getty Images)

Sunday night’s game was also down 11 percent from the previous low set this season during week 4, in which the Baltimore Ravens beat the Pittsburgh Steelers 26-14. That game earned a 6.1/24 rating among adults ages 18-49, with 16.2 million people tuning in.

In comparison, last week’s 43-40 shootout between the victors, the New England Patriots, led by Tom Brady, and the Kansas City Chiefs, ended up getting a 7.0/26 in the coveted age demographic of 18-49, with 21.11 million viewers.

As previously reported, the NFL ratings last season were overall down most of the year with the national anthem protests taking a lot of the blame. This season, the focus has been less on the protests so far. As EPSN’s Darren Rovell has stated, the debate has apparently been eliminated, if not substantially limited.