The 2018 midterms are being built up as “The most important election of our lives,” but the issue that could fundamentally change the political atmosphere in one of the most important swing states in America is barely getting any play, roughly two weeks from election day.

Amendment 4 in Florida would restore the right to vote for all felons, with an exception for those who have been convicted of murder and rape. The initiative has the support of major interest groups on both the right and the left, including the ACLU and Americans For Prosperity.

“There’s strong recognition that this is good bipartisan public policy whose time has come,” said Reggie Garcia, a clemency lawyer and author who lives in Tallahassee.

There are currently 1.7 million convicted felons in Florida, the vast majority of whom would gain the right to vote if this initiative passes. There are concerns that this could shift the political landscape in the sunshine state. Still, the issue has barely even come up in tight races for governor and Senate in the state.

During Sunday night’s CNN gubernatorial debate between Republican Ron Desantis and Democrat Andrew Gillum, the amendment was not even mentioned once. 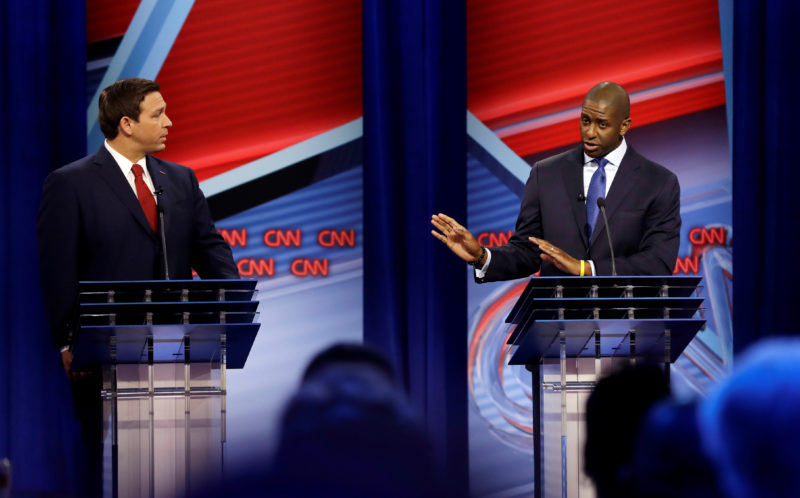 Ballot initiatives tend to fly under the radar because most are thought of as local issues. With how competitive the state of Florida is, Amendment 4 is one that could have national implications and one that could turn the state of Florida blue for the foreseeable future. President Trump defeated Hillary Clinton in Florida by just over 113,000 votes in the 2016 presidential election and Scott defeated former governor Charlie Crist by fewer than 65,000 votes. A look at recent statewide elections in Florida makes it clear that restoring voting rights to 1.7 million convicted felons could fundamentally alter the outcomes of battleground elections. (RELATED: Balance Tilts In Rick Scott’s Favor As He Ends Bill Nelson’s Lead In Latest Poll)

The prospective wave of felon voters concerns some conservative voters in Florida, including Richard Harrison, who started an organization called “Floridian’s For A Sensible Voting Rights Policy,” a group opposing the amendment. Harrison and other conservatives are wondering why there isn’t more of an effort to oppose convicted felons turning into a de facto voting bloc, considering the potential ramifications for the GOP if the amendment passes.

“Where the hell is the private conservative money?” Harrison asks. “We need funding.”

There has been no comment on this amendment from the White House, despite the fact that its passage would make it much harder for President Trump to win the state in 2020. If Trump were to come out publicly against Amendment 4, support could galvanize in a state that requires 60 percent of the vote for adoption.

Garcia, for his part, says that he doesn’t think the amendment will result in the political ramifications that many conservatives fear it will, claiming that the amendment transcends ideological lines, also noting that 70 percent of convicted felons in Florida are non-minorities.

“There’s a misconception about this issue,” Garcia says. “Convicted felons cut across all philosophical lines.”

The numbers, however, show a different story. A 2002 study by authors Christopher Uggen and Jeff Manza suggested that for every 10 votes cast by felons, seven would have gone to the Democrats. In 2016, Virginia Democratic governor Terry McAuliffe restored voting rights to 168,000 felons, 42,000 of whom were registered by the time of the 2017 Virginia’s gubernatorial race. Virginia’s numbers suggest that if this amendment were to pass, it could lead to 400,000 new registered voters in the state of Florida by 2020, the overwhelming majority of whom would vote Democrat. This, in a state where statewide races are often decided by less than 100,000 votes.

Conservatives like Harrison make it clear that they aren’t against some form of clemency and restoration, but that blanket resolutions such as Amendment 4 can have negative consequences.

“It’s not the right approach,” Harrison said. “We’re not opposed to clemency, we’re opposed to a blanket restoration.”

Garcia counters that such a blanket restoration is necessary, because of how inefficient the current process is. Much of the support for this amendment comes from the dysfunctional bureaucracy that reviews clemency cases in Florida. Garcia stated that the last case he argued took 12 years before there was a final resolution.

There are currently 23,000 pending clemency cases in the state of Florida, a fact that Garcia says makes this amendment necessary.

“They never catch up,” Garcia says.

The polling has consistently shown public support for the amendment, but much of that has to do with the lack of opposition. However, Garcia is more worried about complacency on his side than an influx of energy on the other side.

“There appears to be momentum,” Garcia said. “But, I think people are too complacent.”

Regarding convicted felons potentially being the decisive voting block in future elections, Garcia doesn’t see a problem with it, pointing to America as a land of second chances.

While that may be true, it’s likely to cause a stir if “convicted felons” become an important part of the electorate that future politicians (and even presidential candidates) have to court.