NBC News host Megyn Kelly revealed Tuesday that she isn’t happy with all of the new rules governing what people can and can’t wear for Halloween.

“I just feel like it’s so absurd, how — who comes up with these rules?” she asked.

Panelists Jenna Bush Hager, Melissa Crawford, and NBC’s Jacob Soboroff appeared to agree that Weinstein would be a bad choice, but Kelly cut in, saying, “I don’t want the University of Kent telling me I can’t do it.” 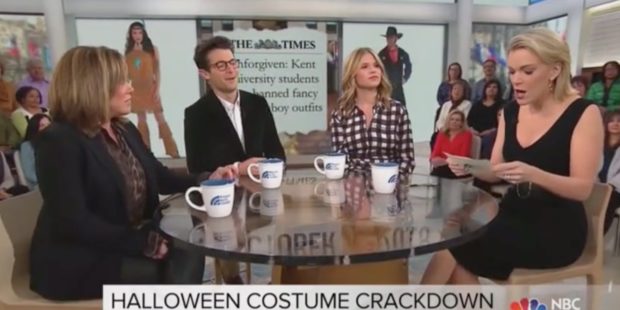 Kelly then went onto list a few of the costumes that were mentioned as “approved” by the university. Among them were the “letters of the alphabet.”

On that note, Kelly mentioned blackface and whiteface, pointing out the fact that while they are considered racist today, they were acceptable just a few decades ago. “That was okay, as long as you were dressing like a character.” (RELATED: Megyn Kelly: Elizabeth Warren ‘Scored A Goal Against Herself’ With DNA Test)

She also agreed with the panel that if someone was offended by that, if you chose to dress in blackface or whiteface, one has “to be able to take it.”

A number of people responded on Twitter immediately, suggesting that she was defending blackface for racist purposes.

Megyn Kelly wonders what the big deal is about blackface pic.twitter.com/07yvYDuAYe

I thought this might have been an exaggeration, but no, Megyn Kelly is really doing a “I don’t see what’s so offensive about blackface” https://t.co/xtECr43UMg

Reasons to keep a saved search for the word “blackface” being said on TV:

1. You just never know when Megyn Kelly’s going to trip and fall into a bucket of racism. pic.twitter.com/V1HBkpwyWV

I cannot believe the ignorance on this in 2018. You are on national television. You have a responsibility to educate yourself on social issues @megynkelly. This is so damaging. https://t.co/R7UJzkDDG9 https://t.co/7qFkqGHfGJ

While all four panelists agreed that there were certain lines that probably shouldn’t be crossed, Kelly concluded with a simple statement: “I can’t keep up with the number of people we’re offending just being normal people these days.”

Kelly apologized to her colleagues on Tuesday afternoon in an internal email obtained by The Hollywood Reporter, saying, “I realize now that such behavior is indeed wrong, and I am sorry. The history of blackface in our culture is abhorrent; the wounds too deep. I’ve never been a ‘pc’ kind of person — but I understand that we do need to be more sensitive in this day and age.”