President Donald Trump made a surprising claim Monday morning about the migrant caravan winding its way toward the U.S. through Mexico — people from the Middle East are among the thousands of Central American travelers.

“Criminals and unknown Middle Easterners are mixed in,” Trump wrote on Twitter. “I have alerted Border Patrol and Military that this is a National Emergy [sic].”

When pressed on his assertion later that afternoon, the president doubled down, telling reporters at the White House to “go into the middle” of the caravan, where “You’re gonna find MS-13. You’re gonna find Middle Eastern [people].”

Trump did not offer any supporting evidence for his claims, prompting leading media outlets to pile on with a raft of fact-check articles that generally reached the same conclusion: the president was misleading the public about the nature of the caravan. (RELATED: Pence: ‘Inconceivable’ Middle Easterners Not Part Of Caravan)

The controversy over Trump’s comments overshadowed the relevant fact that people from Middle Eastern countries, including some identified as particularly fertile grounds for terrorism, are known to have been smuggled across the southwest border in the recent past. And illegal immigrants from the Middle East are regularly intercepted by border authorities after crossing from Mexico, though they represent a tiny fraction of the total number of illegal entries.

In fiscal year 2017, the U.S. Border Patrol arrested roughly 310,000 people nationwide, according to Customs and Border Protection figures. Of that number, 61 were nationals of countries the Department of State defines as being in the greater Middle East.

Whether land-based illegal immigration of Middle Eastern nationals constitutes a security threat above and beyond that presented by Central Americans is something of an open question in the government. The White House Strategy for Counterterrorism released earlier in October does not mention possible infiltration of terrorists across the southwest border.

However, the State Department’s “Country Reports On Terrorism 2017,” which was released in September, did concede that terrorist groups could exploit deficiencies in border security along human smuggling routes into the U.S. 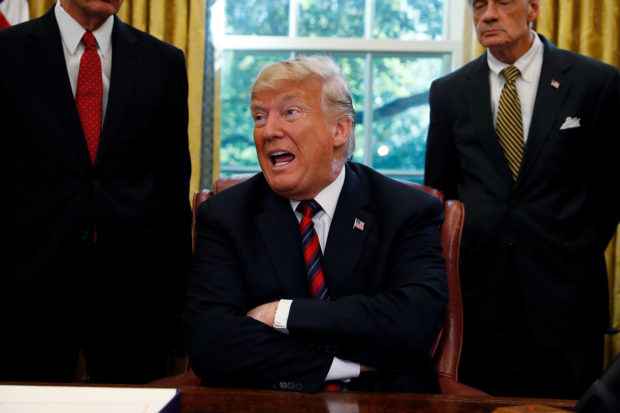 That possibility is illustrated in two recent cases in which human smugglers managed to sneak dozens of migrants in a higher-risk category known as “special interest aliens” (SIAs) into the U.S. by way of the southwest border. SIAs are nationals of countries the government believes to have notable terrorism problems, including the five Middle Eastern and greater Middle Eastern countries on Trump’s travel ban list: Iran, Libya, Somalia, Syria and Yemen.

Immigration and Customs Enforcement (ICE) agents in August arrested Jordanian-Mexican dual national Moayad Heider Mohammad Aldairi at JFK Airport in New York. The Monterrey, Mexico-based Aldairi smuggled at least six Yemenis across the southwest border into Texas between July 2017 and December 2017, according to a criminal complaint.

Prior to Aldairi’s arrest, Pakistani national Sharafat Ali Khan pleaded guilty in April 2017 to human smuggling charges for running a network that sent dozens of illegal immigrants to the U.S. via Brazil and Mexico. Most of the smuggled migrants were from Pakistan, which was left off the travel ban list but is considered a special interest country because of the prevalence of terrorist groups operating there.

There is no indication that any of the people smuggled into the U.S. in these two cases had ties to terrorism. But border authorities have reported arresting foreign nationals thought to be members of designated terrorist groups, including at least two members of al-Shabaab, the Somalian al-Qaeda affiliate, in 2014.

As for the current migrant caravan, Trump acknowledged Tuesday that he didn’t know for sure if Middle Eastern migrants had slipped into the procession

“There’s no proof of anything,” he said.

Administration officials similarly dismissed the idea that a terrorist group could be using the caravan as cover to slip operatives into the U.S.

“We do not see any evidence that ISIS or other Sunni terrorist groups are trying to infiltrate the southern U.S. border,” an American counterterrorism official was quoted as saying by The New York Times and other outlets.