The White House is reportedly preparing an executive order that would close the border to people traveling to the U.S. through Mexico in a migrant caravan, a move that would mirror the Trump administration’s travel ban on citizens from several Muslim-majority nations in 2017.

Details of the plan, which was reported Thursday night by the Washington Post and other outlets, are sparse, but it reportedly aims to prevent the caravan migrants from applying for asylum if they reach the U.S.-Mexico border. (RELATED: Trump Considering Completely Shutting Down Border — No Asylum)

Under U.S. immigration law, migrants can petition for asylum by presenting themselves at a U.S. port of entry, but the executive order under consideration would override that provision on national security grounds. The scope of the order is unclear at the moment — it could apply to the caravan migrants or asylum seekers from Central American more broadly.

Administration officials say the order is based on the same provision of the Immigration and Nationality Act that President Donald Trump invoked to implement the travel ban in 2017, according to multiple reports. The provision — section 212(f) of the INA — allows the president to block the admission of any “class of aliens” into the country if their entry is determined to be “detrimental to the interests of the United States.”

The Trump administration has characterized the migrant caravan as an impending public safety threat, claiming that criminals and gang members were among the thousands of people marching toward the southwest border. Trump himself courted controversy when he asserted without evidence that Middle Eastern people were mixed among the Central American migrants. (RELATED: Trump’s Comments On Migrant Caravan Raise Question — Are ‘Middle Easterners’ Being Smuggled Across Southwest Border?)

If the administration does issue an order blocking caravan migrants from applying for asylum, it will almost certainly face legal challenges similar to those against the 2017 travel ban. In that case, civil rights groups accused Trump of anti-Muslim animus and argued the ban violated the INA’s provisions against discrimination on the basis of religion and nationality.

But the legality of the travel ban was affirmed in Trump v. Hawaii in June, when the Supreme Court upheld the restrictions on entry by citizens of six Muslim-majority nations as consistent with the president’s authority under Section 212(f). In his majority opinion, Chief Justice John Roberts cited national security justifications for the travel ban and the deliberate, thorough process used to draft the final order after an initial chaotic rollout. 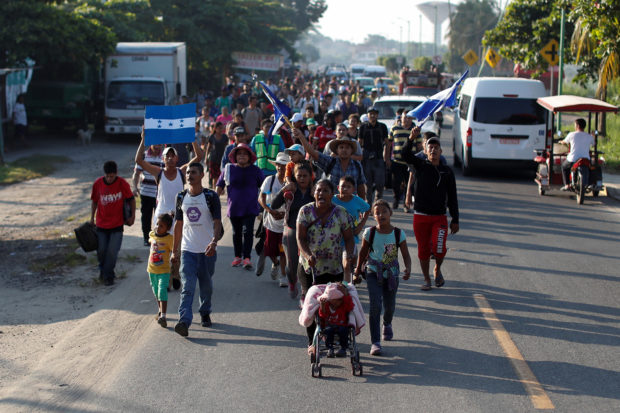 Central American migrants, part of a caravan trying to reach the U.S., shout slogans as they walk along the road, in Ciudad Hidalgo, Mexico October 26, 2018. REUTERS/Carlos Garcia Rawlins

Administration officials have cautioned that an order affecting caravan migrants has not been finalized. The administration is also weighing a deployment of up to 1,000 active duty troops to support federal law enforcement agents at the southwest border.

Meanwhile, the migrant caravan has dwindled to about 3,500 people, down from its peak size of about 7,000 earlier in October. At least 1,500 migrants have applied for asylum in Mexico, and hundreds have returned to their home countries in Central America.