“Over several interviews, we’ve learned information suggesting the FBI secretly transcribed, and even taped, George Papadopoulos in 2016,” wrote Meadows, the chairman of the House Freedom Caucus and a member of a congressional task force investigating the FBI’s handling of the Trump-Russia probe.

“If these ‘tapes’ do exist, the DOJ must make them available to Americans immediately,” the Republican added. “Their complete refusal to be transparent helps no one.”

If these “tapes” do exist, the DOJ must make them available to Americans immediately. Their complete refusal to be transparent helps no one.

Meadows’ comment provides more context to what other Republican lawmakers have said in recent weeks about potentially exculpatory information regarding Papadopoulos. 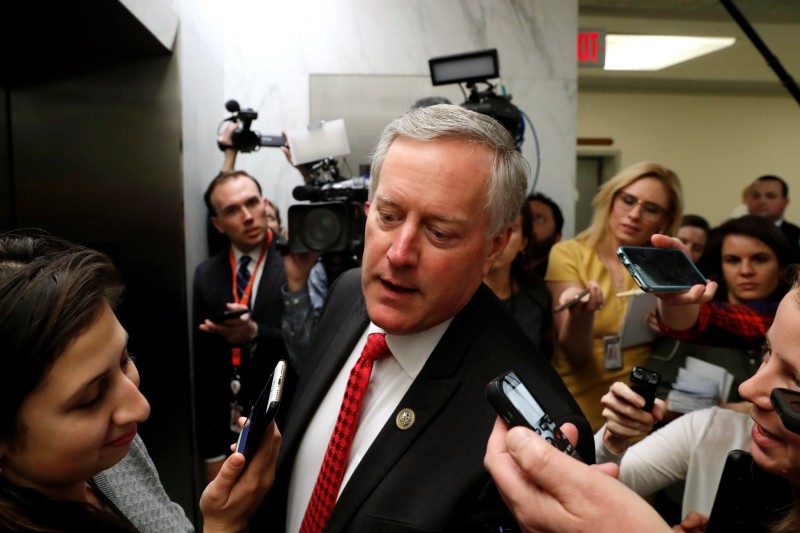 U.S. Rep. Mark Meadows is trailed by reporters as he walks between meetings at the U.S. Capitol in Washington, U.S. Jan. 18, 2018. REUTERS/Jonathan Ernst

GOP Rep. John Ratcliffe of Texas, a member of the House Committee on the Judiciary, suggested on Oct. 14 that the FBI and Justice Department had evidence “that directly refutes” the FBI’s premise of its collusion probe.

That investigation was opened on July 31, 2016 after the FBI received information from the Australian government about a conversation that Papadopoulos had with an Australian diplomat two months earlier. The diplomat, Alexander Downer, claimed that in a May 10, 2016 meeting that Papadopoulos said that Russia had derogatory information about former Secretary of State Hillary Clinton. (RELATED: FBI Has Evidence That ‘Directly Refutes’ Premise Of Trump-Russia Probe, GOP Rep Says)

Ratcliffe said the FBI failed to provide exculpatory evidence about Papadopoulos to judges on the Foreign Intelligence Surveillance Court.

The FBI referenced Papadopoulos in applications for Foreign Intelligence Surveillance Act (FISA) warrants against former Trump campaign adviser Carter Page. But Ratcliffe, who is one of the few lawmakers who has reviewed unredacted copies of the FISA applications, suggested that the FBI “only presented to the court the evidence that made the government’s case to get a warrant to spy on a Trump campaign associate.”

Ratcliffe suggested the FBI withheld information that would portray Papadopoulos in a different light.

Papadopoulos has been sentenced in the special counsel’s investigation for lying to the FBI during an interview on Jan. 27, 2017. But Papadopoulos has not been accused of more serious charges of conspiring with Russians or hacking Democrats’ emails, which is one of the main conspiracy theories about potential campaign collusion.

The potentially exculpatory information about Papadopoulos could revolve around his interactions with Stefan Halper, a former University of Cambridge professor who was identified in May as a longtime FBI and CIA informant.

Halper made contact with Papadopoulos, Page and former Trump campaign official Sam Clovis prior to the election, The Daily Caller News Foundation first reported on March 25.

Halper contacted Papadopoulos in September 2016 and offered to fly him to London under the guise of discussing a policy paper. Papadopoulos accepted the offer and met Halper in London two weeks later.

The FBI had at least one transcript that “called into question the Trump campaign’s — and specifically Papadopoulos’s — alleged complicity with Russia,” The Hill’s John Solomon reported on Oct. 23.

TheDCNF has not confirmed whether the FBI has recordings or transcripts of Papadopoulos’ encounters with Halper. But Papadopoulos has told TheDCNF that he believes that Halper was recording him with his cell phone during their visit.

Halper has not responded to repeated requests for comment.