Voters in the historically key swing state decided Tuesday that 1.5 million convicted felons who served their sentences should be allowed to vote again, removing itself from the list of four states in the U.S. that permanently bans convicted felons from voting even after they are released from prison.

The remaining states that permanently disenfranchise convicted felons are Iowa, Kentucky and Virginia, according to the American Civil Liberties Union (ACLU).

Amendment 4, which now has significant implications for future elections, passed with 64.1 percent of the vote, above the 60 percent the Florida Constitution requires to pass, according to The New York Times tracker.

“This amendment restores the voting rights of Floridians with felony convictions after they complete all terms of their sentence including parole or probation,” the amendment reads, which was titled on the ballot the “Voting Restoration Amendment.”

Amendment 4 does not apply to felons convicted of murder or sex crimes. Those felons are still permanently barred from voting “unless the Governor and Cabinet vote to restore their voting rights on a case by case basis.”

Amendment 4 was added to the ballot in January after political committee Floridians for a Fair Democracy announced that its campaign, Second Chances Florida, surpassed the 766,220 signatures needed to get an amendment on the ballot. (RELATED: Swing State Florida Could Add More Than 1 Million Felons To Voting Rolls)

The proposal has since garnered national attention due to support from prominent figures including singers John Legend and Rihanna and the Koch brothers-backed group Freedom Partners.

“We believe that when individuals have served their sentences and paid their debts as ordered by a judge, they should be eligible to vote,” Freedom Partners Chairman Mark Holden said in a statement on Sept. 13.

“If we want people returning to society to be productive, law abiding citizens, we need to treat them like full-fledged citizens,” Holden added.

As the law stands now, convicted felons have to wait five years after completing their sentences before reapplying for the right to vote. The felons must then get their petitions personally approved by the governor after meeting before a panel of Florida Cabinet-level elected officials, which The Tampa Bay Times reported rarely ever meets.

The majority of the 1.5 million voters this affects is disproportionately black and Democratic-leaning, according to another report by The Tampa Bay Times from Nov. 2. (RELATED: This Ballot Initiative Could Change The Landscape Of American Politics)

The numbers are still flowing in for Florida’s gubernatorial race, but Democratic candidate and former Tallahassee Mayor Andrew Gillum supports this measure. 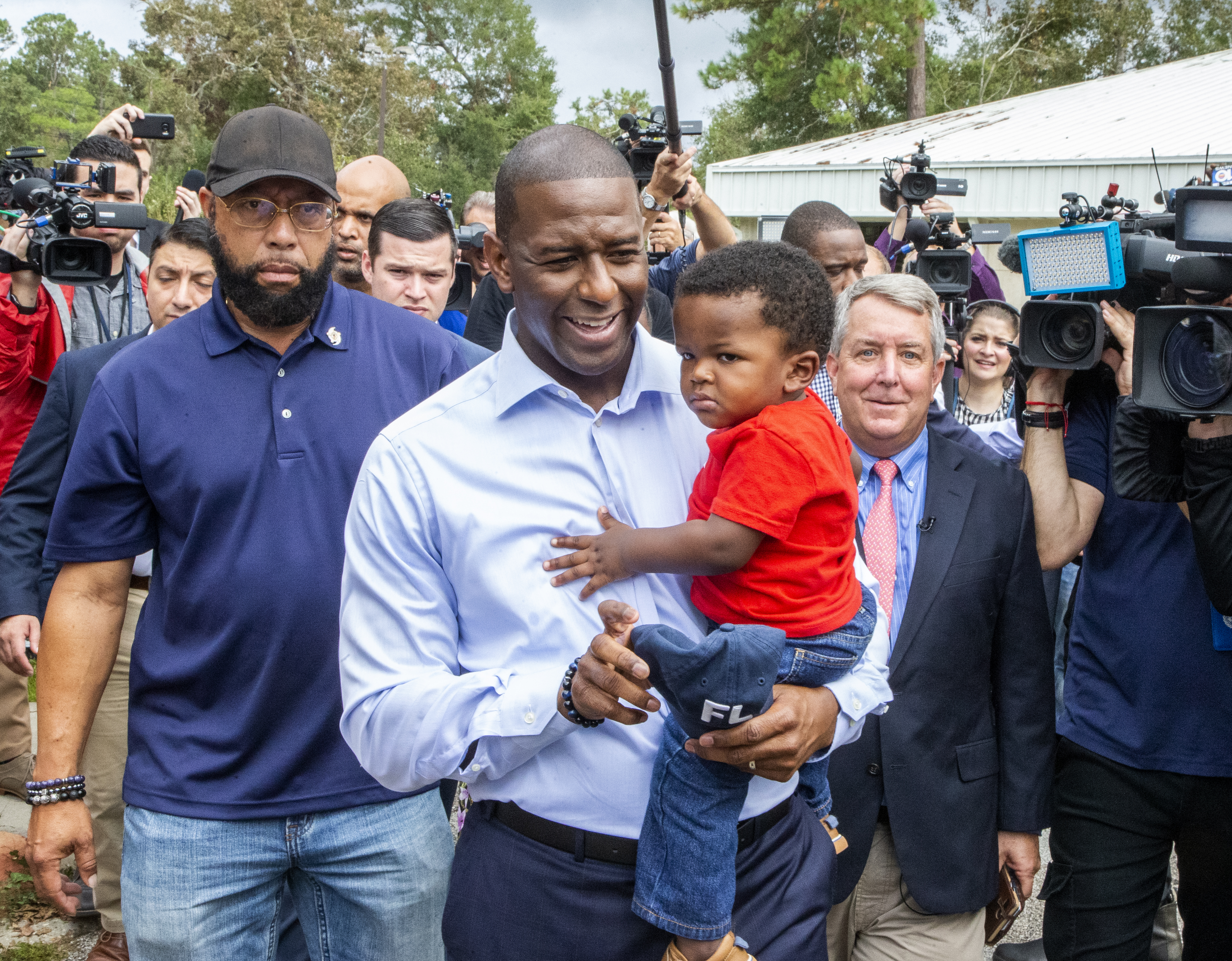 Tallahassee mayor and Florida Democratic gubernatorial candidate Andrew Gillum, with his one-year-old son Davis, walks out after casting his ballot on Nov. 6, 2018 in Tallahassee, Florida. (Photo by Mark Wallheiser/Getty Images)

“We ought to level those barriers that keep you from being able to make a way for yourself and for your family, having the dignity around a vote,” Gillum said at a campaign rally in April, according to a WCTV report.

Republican candidate for governor and former GOP Rep. Ron DeSantis does not.

“An appallingly high percentage of people who get out of prison as convicted felons re-offend,” DeSantis said, according to the report, suggesting that felons need to prove they’ve changed their lifestyles after being released from prison before they can vote again.

President Donald Trump beat Hillary Clinton in Florida by 112,911 votes in the 2016 presidential election, which is less than one-tenth of the number of felons who are rejoining voting rolls, signifying how impactful this measure is.