Kim initially jumped out to a slim lead of a few points that slowly and steadily withered away as additional ballots were counted in the eight days following the Nov. 6 vote.

Cisneros’ victory flips retiring Republican Rep. Ed Royce’s seat from red to blue in a race that was widely considered a toss-up going into the midterm elections. 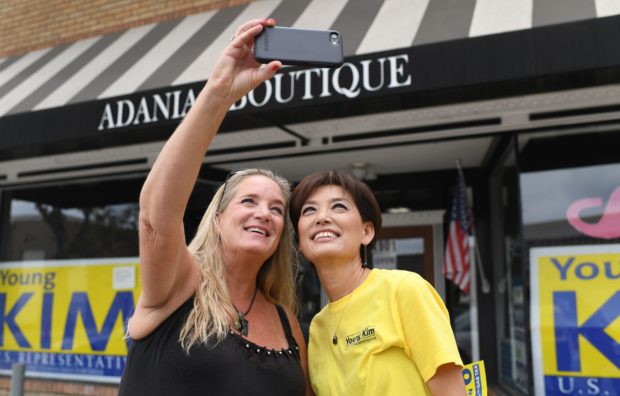 Republican candidate for US Congress Young Kim, 55, (R) takes a selfie with a supporter outside her campaign office in Yorba Linda, California, October 6, 2018. (ROBYN BECK/AFP/Getty Images)

Kim first immigrated to the U.S. territory of Guam from South Korea as a teenager in 1975, before later moving to Hawaii and then attending the University of Southern California.

Cisneros won despite a sexual harassment accusation that hampered his campaign early on in the race. The California Democrat who accused him later withdrew her claim. (RELATED: Liberal PAC Targeting #MeToo-Accused Politicians Only Targets Republicans, Gives Prominent Democrats A Pass)

Former President Barack Obama gave Cisneros’ campaign a boost by campaigning for the embattled Democrat even before the allegation was withdrawn.

Excited to campaign with President Obama this weekend!https://t.co/8G8k6qK9g3