Dozens of patrons at the Thousand Oaks, California bar where a gunman killed 12 people late Wednesday are survivors of the massacre at a country music festival in Las Vegas last year, according to witnesses. (RELATED: 13 PEOPLE REPORTED DEAD AFTER SHOOTING IN CALIFORNIA BAR)

Nicholas Champion told CBS News that he and “probably 50 or 60 others” inside the Borderline Bar & Grill had also attended the Route 91 Harvest festival in October 2017, where a gunman killed 58 people and wounded nearly 500 others in the worst mass shooting in U.S. history.

“It’s the second time in about a year and a month that this has happened,” Champion said. “It’s a big thing for us. We’re all a big family and unfortunately this family got hit twice.”

“I was at the Las Vegas Route 91 mass shooting”: Man inside Southern California bar when a gunman opened fire was with “probably 50 or 60 others” who were also at the Las Vegas massacre last year. https://t.co/ggd6FHg1d4 pic.twitter.com/x3NNjaaL27

At least 100 people were in the Thousand Oaks bar on Wednesday night when a gunman burst in and opened fire with a .45 caliber pistol. A total of 12 people, including a responding sheriff’s deputy, were killed and at least that many injured in the shooting. (RELATED: California Bar Shooting — Here’s What We Know)

Many of the Borderline patrons were there to celebrate “College Country Night.” The bar had opened its doors to anyone age 18 and up for the event.

Survivors described a chaotic scene as the gunman, who reportedly deployed smoke grenades, began the attack.

“I was sitting at the tables nearest to the front door. And I hear some guns, you know, I hear some loud pop, pop, pop. And I didn’t know what it was. I thought it was a joke,” John Hedge told Fox News in an interview early Thursday.

“Also, I see my stepdad dive to the ground. And he says, you know, ‘hide, hit the deck.’ You know, what are you doing, get to the ground sort of thing, yelling. And so I dive,” Hedge added. “And I look up and, you know, there is a gunman taking fire. The bouncer was already down at that point.” 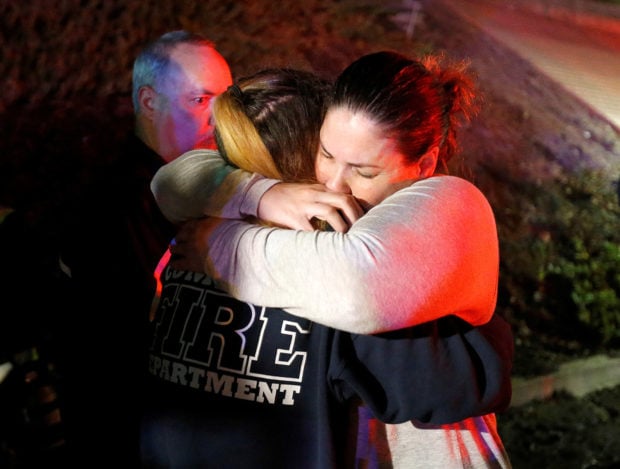 People comfort each other after a mass shooting at a bar in Thousand Oaks, California, U.S. November 8, 2018. REUTERS/Ringo Chiu

The suspected gunman, 28-year-old Ian Long, was discovered dead at the scene, apparently from a self-inflicted gunshot. A Marine Corps veteran who had deployed to Afghanistan, Long was known to local law enforcement after sheriff’s deputies were called to his home in Newbury Park, California, home regarding a disturbance there.

Long “was somewhat irate, acting a little irrationally,” during that call, Ventura County Sheriff Geoff Dean said Thursday. But mental health specialists who interviewed Long ultimately cleared him because they “didn’t feel he was qualified to be taken under 5150,” Dean added, referring to the section of the California code that permits the involuntary psychiatric commitment of people believed to present a danger to themselves or others.

Thus far, there is no known motive for the attack, according to investigators.