A 22 year old smoked his Juul during a debate with a medical doctor on the potential health risks of vaping Thursday night on Fox News’ The Ingraham Angle.

“Well look, I’m 22 years old. So I’m using them legally and honestly they’re just cool. You rip them. There is nothing cooler than blowing a fat cloud like that. They call me the colossus of cloud. It helps my swag. It helps my drip. I love walking around. It’s really good for getting chicks too. Honestly I started about a year ago and I haven’t looked back since,” Scibelli began.

Host Laura Ingraham added, “Doctor, what should we know about the use of these e-cigarettes, vaping. Wildly popular. Parents don’t really know their kids are doing it. Like what’s the big deal? It’s not like a cigarette, right?”

Scibelli then inhaled from his Juul and immediately began coughing. He also, at one point, pulled out two Juuls. Scibelli was wearing a hat that said “vape god” on it. (RELATED: FDA To Ban In-Store Sales Of Many Flavored E-Cigarettes To Keep Them Away From Teens)

“Well it’s just as harmful as cigarettes. Smoking causes more deaths than alcohol, drugs, guns, and car accidents combined. The nicotine in cigarettes and in vaping products such as Juul, is highly addictive. And when it comes to children it can cause brain developmental abnormalities in kids. Concentration problems, memory problems, problems with decision-making, anxiety, depression,” said Nesheiwat. 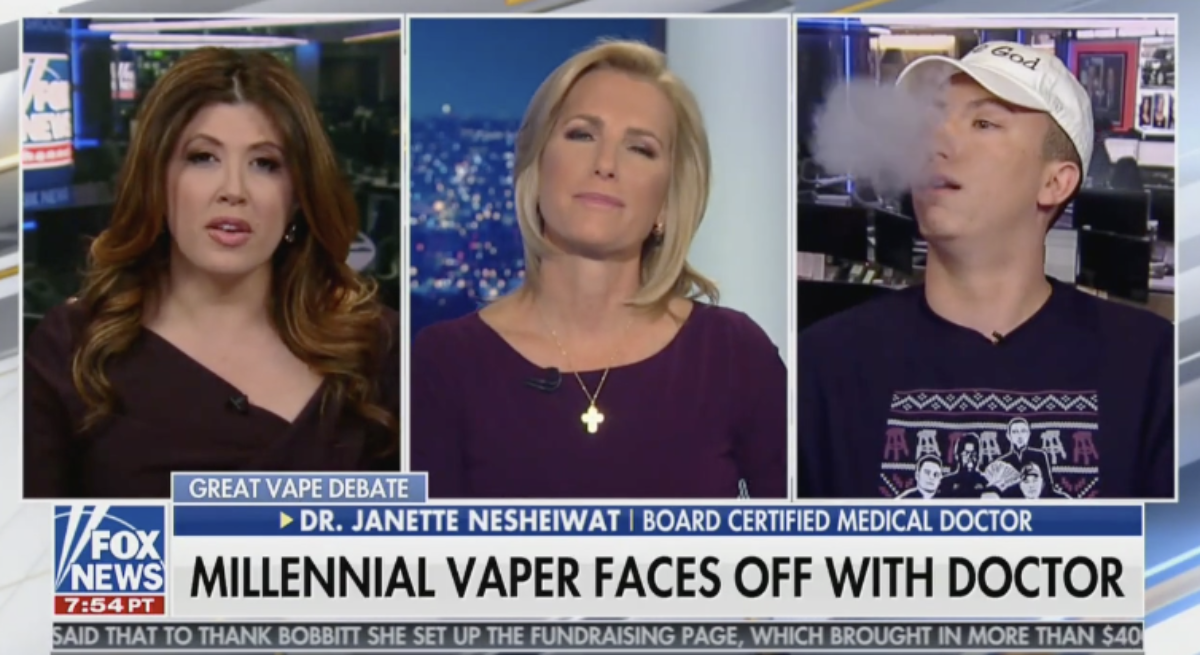 “It doesn’t matter. You are inhaling propylene glycol, formaldehyde, traces of metals and chemicals which can cause upper respiratory tract infections, asthma flare ups, COPD, which can allow you to have trouble breathing,” the doctor said. “Poor Tommy over there is gasping for air.”

“Tommy, you don’t seem to be bothered at all by formaldehyde or any of the things you take in. You love it. Look at how Tommy, look at how he looks fantastic,” Ingraham followed up. “Tommy, did you smoke cigarettes before?”

When asked if he used a Juul in an attempt to quick smoking cigarettes, Scibelli answered,”No, no cigarettes. Cigarettes are bad for you. I would never do anything that’s bad for your lungs or anything. I just stick to Juul.”