Paradise ran dry on water as waves of fire rushed toward people running from wildfires engulfing the small California town. Yet many citizens managed to escape before the blaze consumed their village.

One fire outpost near the Sierra Nevada town recorded wind blasts of 52 mph on Nov. 8. A brush fire began later that morning, churned toward the town, and prevented many people from evacuating on one of the few roads out of Paradise. Some sheltered in place while others ran for cover.

Nichole Jolly, a 34-year-old Paradise native, received a one-word text from her husband earlier that morning that simply read: “Fire.” He texted again shortly thereafter, “Huge.” Staff at the hospital she worked at began moving out patients before official evacuations.

Jolly, who told her story to the Los Angeles Times, made her way out of town on one of the town’s four evacuation routes, which was jammed with vehicles struggling to flee. Drivers were crawling forward as embers rained down on the roofs of their cars. She called her husband while her car disintegrated around her. He told her to run

The rubber on Jolly’s shoes melted into the asphalt, she reporters at the LA Times. The back of her scrubs caught fire, too, blistering her legs. “I can’t die like this,” she said to herself. “There’s no way I’m going to die sitting in a car. I have to run.”

Jolly then ran pell-mell into the black smoke, plowing through the blackness with her hands stretched out before her. She eventually stumbled directly into a fire engine, when two firefighters yanked her into the truck and radioed for help. They got one reply: “Impossible.”

A van marked by search crews is seen in the aftermath of the Camp Fire in Paradise, California, U.S., Nov. 17, 2018. REUTERS/Terray Sylvester 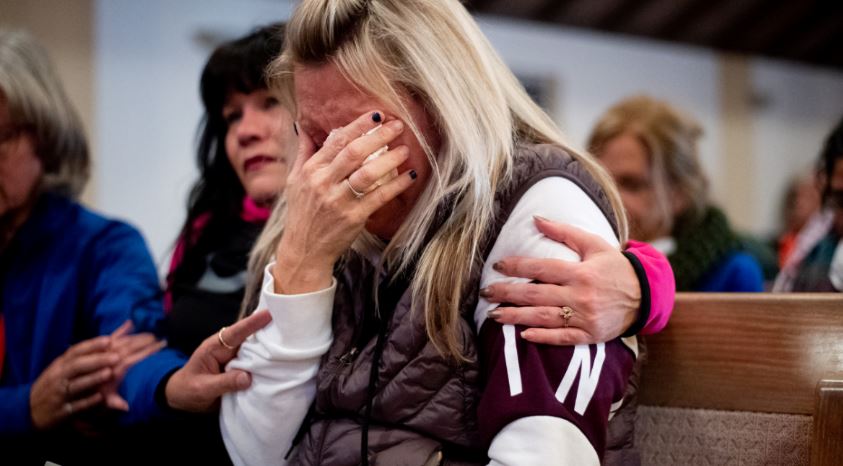 Laura Martin mourns her father, TK Huff, during a vigil for the lives and community lost to the Camp Fire, Nov. 18, 2018. Noah Berger/Pool via REUTERS

Other survivors struck a defiant tone.

Brad Weldon and his blind mother’s caregiver successfully beat back the licking flames with nothing more than a garden hose and buckets of water. They had to lie down in dirt from time to time to “avoid burning up” as 60 mph winds carried flames through the forest,  The Associated press reported Monday.

Weldon and his mother were one of only a handful of people who defied orders to evacuate. “If they take me out of here, it will be at gunpoint,” he told The Associated Press. “My mom says they’ll have to beat her ass, too. She ain’t going without a fight.”

Jolly was fleeing from one of the deadliest wildfires in California history. The Camp Fire destroyed more than 12,000 buildings as it engulfed 150,000 acres. At least 80 people were killed by the blaze and about 1,200 people are still unaccounted for by authorities.

It was one of three fires whipsawing their way across the Golden State. Reports suggest utility Pacific Gas & Electric Co. may be to blame for at least one of the deadly blazes. State officials earlier in 2018 blamed PG&E power lines, conductors and power poles for 12 deadly Northern California fires that raged in 2017. (RELATED: Arizona Firefighters Head To California To Help Battle Blazes Rampaging State)

The Camp, Hill and Woolsey Fires could ultimately cost the insurance industry anywhere from $8.6 billion to $13 billion, according to estimates Monday from CoreLogic, a financial services company.