“These people have to be removed from our system because they’re bad for us,” Carrey said, according to The Hollywood Reporter. (RELATED: Jim Carrey Hits Cruz Below The Belt Over Response To His Latest Artwork)

“Trump is a melanoma, and anybody that covers for him, including Sarah Sanders, is putting makeup on it. It shows that there’s a deeper problem in this country, and that problem is greed,” he said.

Carrey accused Republicans of being “criminal” and said the GOP is “raping our system” and “destroying” America.

“These are not people you can deal with. You cannot be bipartisan with a criminal. A rapist needs to be removed, not negotiated with,” Carrey said. “These people are raping our system, they’re destroying it right in front of us.”

He also spoke about the Christian right and its lack of morality before referencing his painting of former NFL quarterback Colin Kaepernick. 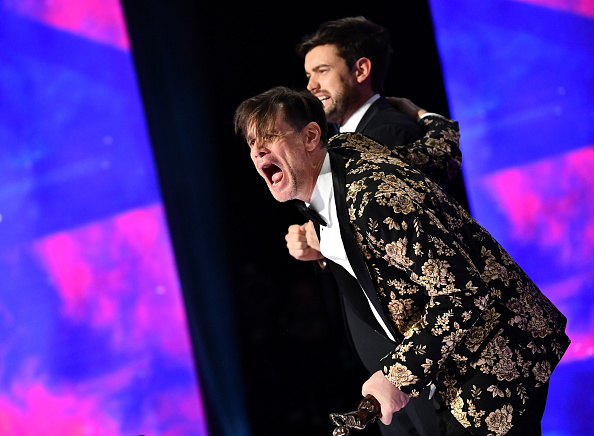 “I think they’re going to find out once and for all that the Christian right has never been about morality,” Carrey added. “It’s been about holding on to power and using morality to do so.”

As for Kapernick, Carrey said he wanted to encourage Nike’s “act of goodness” for hiring him and praised the black community for showing “grace” in the face of “cancerous hate.”

“We have to encourage goodness, that’s how we get more goodness,” he said. “The African-American community has incredible grace in the face of this cancerous hate. They’re unbelievable. I don’t know how they haven’t burned this country down.”

This isn’t the first time Carrey has been publicly acrimonious towards Republicans. He depicted Texas GOP Sen. Ted Cruz as a “vampire” in one of his paintings in early November, and back in October he painted a portrait of Trump and his supporters rotting in hell.

“The GOP are now completely invested in Trump’s economy of LIES. They say they’re gonna give you HEALTHCARE while working to destroy it. They make up lies about refugees while KIDNAPPING INNOCENT CHILDREN! Vote Democrat. Help save the future. DON’T FOLLOW THE RED HAT TO HELL,” his tweet read.