GM said Monday that it will cut roughly 14,000 people in North America and will idle factories in Michigan, Ohio, Maryland and Canada. The layoffs come as the company focuses on manufacturing electric vehicles over gas-powered sedans.

Politicians and ordinary citizens are blasting the decision. “It’s all about greed. It’s all about putting more in their pockets,” one employee said, according to CBS. “The bad thing is to get this news on the day after we come back from Thanksgiving,” another employee noted.

“GM owes the community answers on how the rest of the supply chain will be impacted & what consequences its disastrous decision will have” Ohio Sen. Sherrod Brown, a Democrat, wrote in a tweet following the announcement.

The bulk of the cuts include 8,000 salaried jobs, making it the largest cutbacks since GM went bankrupt and was bailed out by taxpayers during the 2008 financial crisis. One victim of the move is the Chevrolet Volt, a hybrid car Obama once championed.

“I got to get inside a brand-new Chevy Volt fresh off the line,” Obama said during a 2012 visit to a Detroit Chevy factory. “I’ll bet it drives real good. And five years from now when I’m not president anymore, I’ll buy one and drive it myself.” 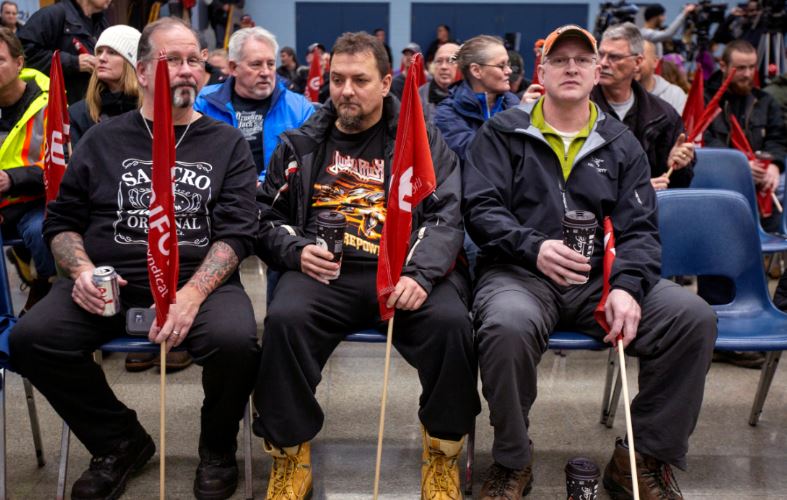 The announcement also comes as President Donald Trump’s tariffs on steel have cost the automaker $1 billion – he campaigned on bringing manufacturing back to a beleaguered rust belt. “We are going to get those jobs coming back and we are going to fill up those factories or rip ’em down and build brand new ones,” he told an Ohio crowd last year.

“This country has done a lot for General Motors,” he said Monday before departing the White House for a campaign stop in Tennessee. “They better get back to Ohio and soon. So we have a lot of pressure on them.” The company has maintained profitability since the bailout.

GM is one of several auto companies, including Tesla, that is seeking an extension of tax credits for those purchasing electric vehicles. The company helped create the so-called EV Drive Coalition on Nov. 13 as many automakers approach the cap of 200,000 vehicles per manufacturer before the credits phase out.

The $7,500 tax credit will drop starting Jan. 1, 2019, to $3,750 around mid-year, according to Tesla’s website. GM is entering a similar stage — it is expected to hit the 200,000 vehicle point with sales of its Chevrolet Bolt EV, among other vehicles. (RELATED: Tesla Joins Forces With GM And Others Seeking To Save Electric Car Subsidies)

Analysts argue that phasing out the credit would harm Tesla and GM. Data show the elimination of the tax credit could seriously hobble both companies, though Tesla might feel a bigger sting  considering the company’s inability to mass produce vehicles at the scale of its larger competitors.