As the polls closed on election day last month, six California Republican House candidates, including Representatives Dana Rohrabacher, Steve Knight, and Mimi Walters, were ahead in their respective races. However, as the absentee and provisional ballots rolled in over the intervening weeks, all six lost to their Democratic opponents.

The case of Korean-American GOP candidate Young Kim was one of the most prominent examples. On election night, Kim held an 8,000 vote lead over her Democratic opponent Gil Cisneros, and even attended freshman orientation in Washington, D.C. before watching her lead, and her victory, slowly evaporate over the subsequent weeks. 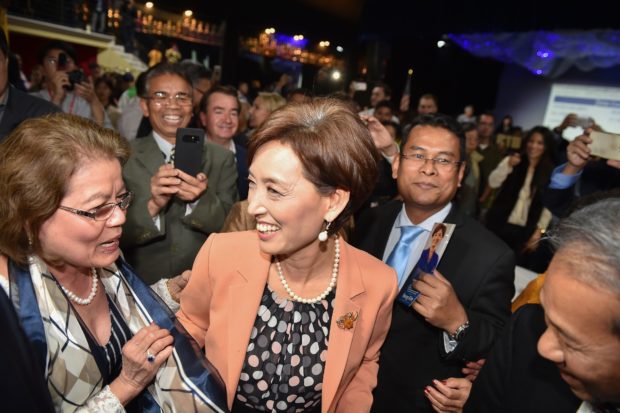 Republican Congressional candidate in California’s 39th District Young Kim is greeted by supporters as she arrives at an election night event in Rowland Heights, California on November 6, 2018. (ROBYN BECK/AFP/Getty Images)

The results drew the attention of House Speaker Paul Ryan.

“California just defies logic to me,” said Ryan at a Washington Post live event. “We were only down 26 seats the night of the election, and three weeks later, we lost basically every California contested race. This election system they have — I can’t begin to understand what ‘ballot harvesting’ is.” (RELATED: Bloomberg Drops Millions On California Dems Ahead Of Midterm Elections)

The stunning turnaround in California, of all states, can be attributed to several factors, as conservative critics like The Federalist’s Bre Payton wrote, but the most significant of those seemed to be the practice of “ballot harvesting.”

Passed as a barely noticed change in the state’s vote by mail procedures in 2016 and signed by then-Governor Jerry Brown, California’s AB 1921 allows voters to give any third party — not just a relative or someone living in the same household, as was previously the law — to collect and turn in anyone else’s completed ballot.

Called “ballot harvesting,” critics say the practice is ripe for fraud. Consider “Lulu,” who was recorded trying to “harvest” what she thought was a Democratic voter’s ballot in Rep. Knight’s district.

It’s a “new service,” said Lulu, for “like, people who are supporting the Democratic party.”

The San Francisco Chronicle reported that 250,000 such ballots were used in Orange County alone, resulting in a Democratic sweep there.

From the Chronicle report:

“We beat Republicans on the ground, fair and square,” said Katie Merrill, a Democratic consultant deeply involved in November campaigns. “Many of the field plans included (ballot harvesting) as an option to deliver voters or their ballots” to the polls.

Those efforts involved identifying voters who might support Democratic candidates and ignoring those who wouldn’t.

In one Orange County household, for example, both the husband and wife were longtime Republicans, said Dale Neugebauer, a veteran Republican consultant. Democratic volunteers came by the house four times, each time asking to speak only with their 18-year-old daughter, a no-party-preference voter, and asking if she wanted them to pick up her signed and completed ballot.

That’s a perfect example of the “thorough and disciplined” ground game the Democrats used, said Merrill.

“We were not wasting time talking to people who weren’t going to vote for Democrats,” she said.

The San Francisco Chronicle quoted Republicans who admitted that Democrats clearly beat them at the new game and that, to compete, they will have to conduct their own “ballot harvesting” efforts.

Before its passage, a group opposed to the bill wrote: “AB 1921 would allow anybody to walk into an elections office and hand over truckloads of vote by mail envelopes with ballots inside, no questions asked, no verified records kept. It amounts to an open invitation to large-scale vote buying, voter coercion, “granny farming”, and automated forgery. AB 1921 solves no problem that a simple stamp can’t solve.”