Macron’s approval rating slipped 4 percentage points in a month to 23 percent, according to an Elabe survey for Les Echos published Thursday. His approval rating is now lower than socialist predecessor Francois Hollande.

“There’s a battle being fought between Macron and public opinion,” Bernard Sananes, head of Elabe, told reporters at a local news outlet. Many of the respondents said Macron “doesn’t know the people and doesn’t understand them.” (RELATED: Here’s How A Proposed Climate Tax Led To France’s Biggest Riot In Years)

Macron enacted a slew of new carbon taxes in January designed to wean consumers off fossil fuels and transfer France’s entire economy to electric cars. The price hikes triggered a wave of protest from demonstrators calling themselves the yellow vest movement. The government has since suspended the tax.

French riot police closed popular tourist areas Saturday and fired tear gas as they tried to quell the chaos in the streets. At least 110 people were injured while protesters associated with the grassroots-driven demonstrations clashed with authorities and vandalized the Arc de Triomphe. 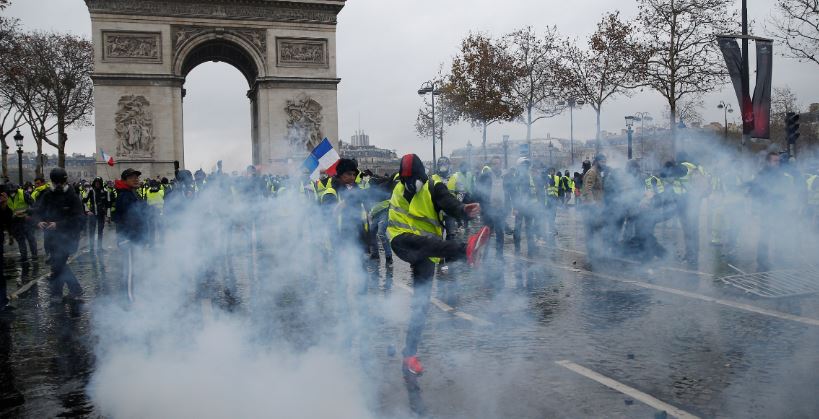 Other polls suggest the French president’s numbers are hovering below 20 percent. A YouGov poll published Friday shows Macron’s approval rating is falling to 18 percent. It was conducted the day before Saturday’s riots, and surveyed 1,006 people across France.

The French government is going to extremes to prevent future protests this weekend. More than a dozen armored vehicles are expected to patrol Paris – which hasn’t happened in the capital city since World War II. There concerns are likely warranted, as the yellow vest movement is picking up steam.

The protests are gaining widespread support, especially among those in the rural areas of the country. Nearly 73 percent of the French approve the demonstrations, according to an Elabe poll conducted during the protests. Support is still divided between Macron’s urban supporters and small-town people who rely on cars.