Canadian Prime Minister Justin Trudeau is again flirting with the idea of a total handgun and assault weapon ban in the country — insisting that would “counter the violence” on Canadian streets.

As CTV News reports, Trudeau was speaking to Montreal radio station 98.5 FM Thursday when he again suggested he is prepared to legislate a full ban. Canada already has some of the toughest gun control legislation in the world and very few of its citizens legally own handguns.

“We are currently reflecting on how we are going to do better to counter the violence caused by handguns and assault weapons, yes,” Trudeau told the radio station. “What’s happening is unacceptable.” (RELATED: Trudeau Government To Study Total Handgun And Assault Weapons Ban)

Ontario Premier Doug Ford has ridiculed Trudeau’s correlation between safe streets and a handgun ban: he pointed to the results of gun control in Chicago as evidence it doesn’t work.

But Nicolas Johnson, editor of TheGunBlog.ca told The Daily Caller that Trudeau’s threats are the usual kind of overkill that gun owners are used to hearing from the prime minister.
“It’s misleading to suggest Canada has ‘easy access’ to guns for anyone. All guns are banned for everyone under threat of prison unless you have a temporary waiver from the federal police — a firearm license.”
Johnson notes that breaking any current gun law relating to buying, selling, storing, transporting or using guns means confiscation of your firearms by police or even time in jail. (RELATED: Toronto Police Union Says Handgun Ban Will Have Zero Impact On Crime) 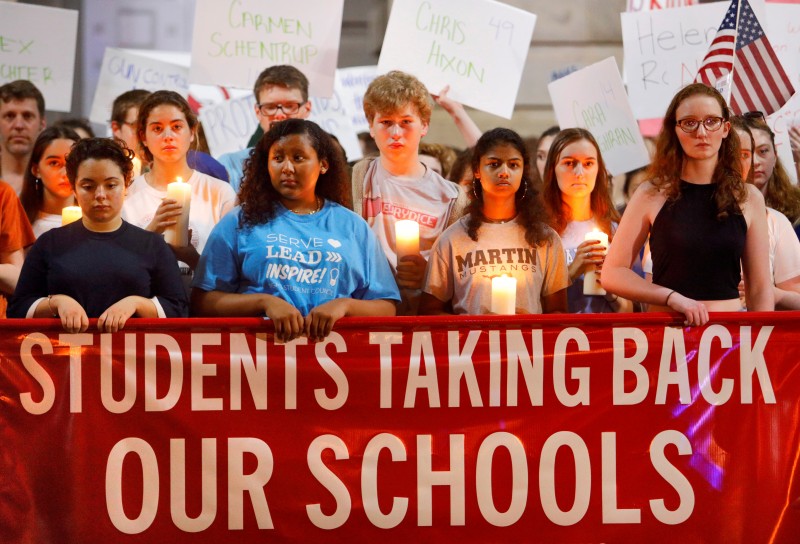 High school students observe a moment of silence in memory of the victims of the shooting at Marjory Stoneman Douglas High School, during a demonstration calling for safer gun laws outside the North Carolina State Capitol building in Raleigh, North Carolina, U.S., Feb. 20, 2018. REUTERS/Jonathan Drake

“The laws we have now are extremely restrictive for hunters and sport shooters to have firearms,” Johnson said. “The point the prime minister seems to be missing is that criminals who smuggle or steal guns don’t care what the law says. They aren’t doing a risk assessment with their lawyers before going on a hit.”

Trudeau originally promised to outlaw handguns and assault rifles when he was campaigning during the 2015 federal election — which he won. His remarks on gun control were intended to mark the 29th anniversary of the mass shooting at the Montreal college of Ecole Polytechnique, when a lone gunman entered the classroom and shot 14 women.