Google CEO Sundar Pichai appeared to catch Democratic lawmakers off guard Tuesday after disclosing in a congressional hearing the paltry amount of money Russia spent on ads on the 2016 election.

Democratic Rep. Jerry Nadler asked Pichai about the extent to which Russia used Google to interject itself in that year’s presidential election. Pichai’s answer seemed to genuinely surprise the New York Democrat.

“We undertook a very thorough investigation, and in 2016, we now know of two main Russian accounts linked to Russia which advertised on Google for about $4,700 in advertising,” Pichai said. Nadler then asked him to repeat the number one more time.

Facebook came under similar scrutiny in 2017, when the Silicon Valley company admitted to congressional investigators to selling political ads to a suspicious Russian outlet in 2016.

Most of the ads did not focus on then-Republican presidential nominee Donald Trump or then-Democratic presidential candidate Hillary Clinton, and the ad sales cost roughly $100,000. Instead, the ads touched on hot-button issues, like race, gun rights, gay rights and immigration.

Meanwhile, Twitter told lawmakers it found about 200 Russian-linked accounts based on what Facebook had identified. Twitter sold more than $274,000 worth of ads to the news outlet RT, a Russian state-run news outlet. 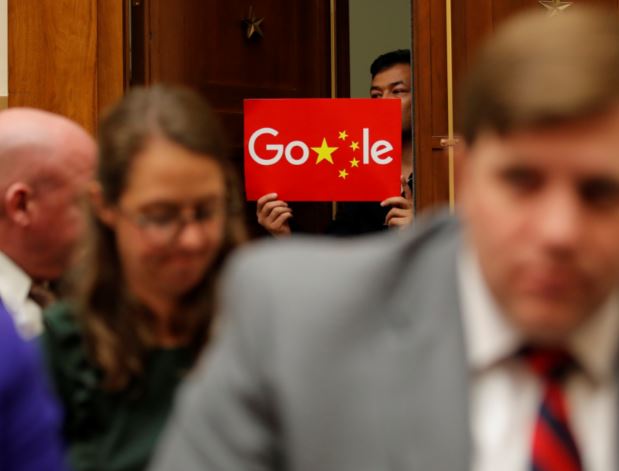 A demonstrator holds up a sign in the doorway as Google CEO Sundar Pichai testifies at a House Judiciary Committee on greater transparency in Washington, U.S., Dec. 11, 2018. (Photo: REUTERS/Jim Young)

Nadler, the ranking member of the House Judiciary Committee, suggested in November that Democrats could subpoena special counsel Robert Mueller if Trump decides to end the Russian investigation. (RELATED: Russian Ads Didn’t Reach Most Facebook users Until After Election Day)

He and other Democrats have expressed concern that acting Attorney General Matthew Whitaker will stifle the probe, which is reportedly in its final phases. Mueller and his team have reportedly started writing a final report of the nearly 18-month investigation.