Islamic terrorists have reportedly killed a dozen Nigerian soldiers and took several others prisoner during a battle late last week.

The clash took place in Borno, in the country’s northeast and resulted in one of the most significant casualty counts suffered by the Nigerian army since the beginning of the month. Although the attack was devastating, Reuters reported that the Nigerian soldiers eventually turned away the attackers.(RELATED: Islamic Terrorists Slaughter 15 In Nigeria)

Boko Haram, an Islamic State breakaway group which was designated as a terrorist organization in 2013 by the U.S. State Department, is suspected to be behind the assault. The group has a significant presence in the area and is currently waging an insurgency against the government of Nigeria, according to a report from Reuters. (RELATED: Italian Priest Kidnapped In Niger, Islamic Terrorists Suspected) 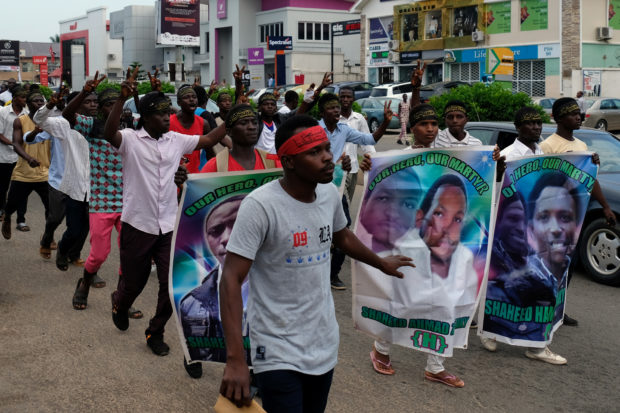 Members of the Islamic Movement of Nigeria gesture during a march to demand the release of their Nigerian Shi’ite leader Ibrahim Zakzaky, along a street in Abuja, Nigeria October 31, 2018. REUTERS/Paul Carsten

The attack comes just a day after officials from the Nigerian army accused personnel working for the United Nations International Emergency Children’s Fund (UNICEF) of aiding and providing intelligence to Boko Haram. The Army temporarily banned the organization but rescinded the order shortly after. The Nigerian army made similar accusations in April after UNICEF staff members reported several soldiers for human rights abuses, reported Al Jazeera.