Before rapper Kanye West visited President Donald Trump in the White House, another pop culture icon made his way to the West Wing.

On December 21, 1970, singer Elvis Presley visited the White House to discuss the issues of the time with President Richard Nixon. Much like Kanye’s visit with Trump, Elvis’s visit with Nixon was viewed as bizarre and shocking. “The King Of Rock ‘n’ Roll” was the biggest cultural icon of the time, and Nixon was seen as an enemy of celebrities during the 1970’s, just like Trump is in 2018. 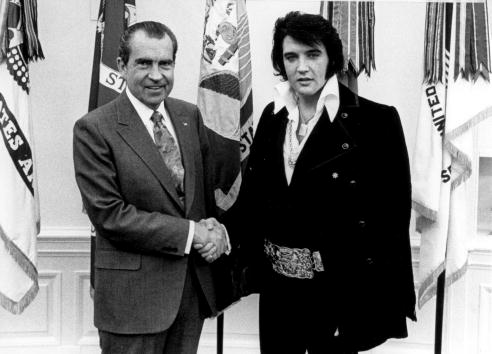 For Presley’s part, he reportedly sought out the meeting in order to get a badge from the Federal Bureau of Narcotics and Dangerous Drugs, something he believed would allow him to travel anywhere with drugs. During the meeting, Presley reportedly told President Nixon that he would use his platform to try to help curb America’s drug problem, and by the end of the meeting had possession of the badge he had sought out.

For West’s part, the circumstances were not exactly the same. West and Trump have been friends for years, long before Trump took over the presidency. Much of their meeting was also broadcast on national television. No television cameras were present for the Presley-Nixon meeting.

But despite all of the differences between the two meetings that came roughly 48 years apart, there is one overarching similarity: the disconnect between Hollywood and Washington, D.C., as evidenced by the open hostility between pop culture and political power and two legendary artists who attempted to bridge the divide.