“I sincerely believe that each late-nite [sic] host is really funny. However, ALL of their monologues and jokes are completely interchangeable,” the 55-year-old comedian tweeted Wednesday to his thousands of followers, as he’s not known for being one to hold back his thoughts. (RELATED: ‘SNL’ Alum Rob Schneider: ‘Saturday Night Live’ Is Now Ruining The Joke) 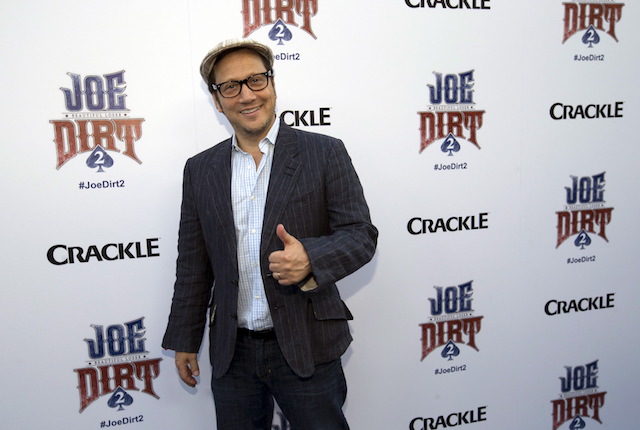 Actor Rob Schneider poses at the premiere of “Joe Dirt 2: Beautiful Loser” at the Cary Grant theatre at Sony Studios in Culver City, California June 24, 2015. The movie opens in the U.S. on July 16. REUTERS/Mario Anzuoni

The latter tweet came along with a screenshot of a message that read, “We are going to do a comedy sketch show which will only be about what we think is funny. There will be no liberal OR conservative bias.”

I sincerely believe that each late nite host is really funny. However,
ALL of their monologues and jokes are completely interchangeable. pic.twitter.com/gi12QKC7DP

“There may be politics if it’s really funny,” he added in the attached message. “But unlike what you see now, there will be no political agenda. We will AIM at ALL SIDES Unsparingly.”

Schneider continued, “Are you in for this show? Please let me know!”

Hours earlier, he tweeted that he was thinking about starting a new sketch show with “no political agenda” and was interested in finding out if people would watch, as he often uses his social media account to discuss his thoughts on the issues of the day.

Question.
Would you guys and gals be interested in watching a sketch tv show with no political agenda?
Thinking about starting one…
Soon

The post comes in light of the former “SNL” star’s recent comments praising a comedy club owner for telling the truth about the “discourse in this country” better than “any news anchor or politician or journalist.”

“Thank you. Said by a comedy club owner. It’s better than anything any news anchor or politician or journalist has said in 10 years,” Schneider tweeted in response to club owner Noam Dworman made about the feedback he got from patrons after he allowed disgraced comedian Louis C.K. to perform at his club.

Here’s that excerpt… don’t think it can be described any better than this… pic.twitter.com/EJadkRxYTc

“We’re living in the dark ages of people having things they believe that they know they can’t say out loud and feeling that you have to come to a conversation with already the correct point of view,” Dworman shared. “You’re not allowed to discuss it, be wrong, be informed by someone else’s opinion. Conversation is meaningless: Conversation in this day and age is just for two people to agree to talk about what they agree about.”