“Mitt Romney is lower than a snake’s belly,” said Dobbs after introducing Rollins, who noted that Romney has become the “leader of the opposition in the Republican Party.”

“I mean, he’s reprehensible,” said Dobbs. “I can’t believe the people of Utah elected this creep.”

“Wait a minute,” said Dobbs after Rollins recalled that Trump had endorsed Romney. “You mean the people of Utah didn’t know that he was anti-Trump? He didn’t run against Trump? He ran with Trump. Is that right? So he’s lied to the people of Utah.” (RELATED: Jerry Falwell Jr: It’s ‘Immoral’ For Evangelicals To Not Support President Trump) 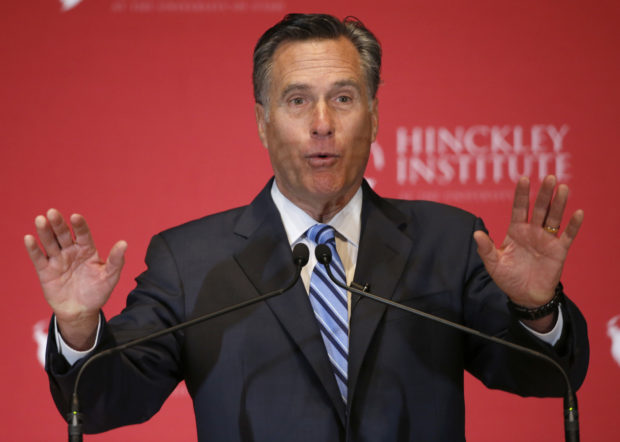 SALT LAKE CITY, UT – MARCH 3: Mitt Romney gives a speech on the state of the Republican party at the Hinckley Institute of Politics on the campus of the University of Utah on March 3, 2016 in Salt Lake City, Utah. Romney spoke about Donald Trump calling him a fraud and arguing against his nomination. (Photo by George Frey/Getty Images)

Rollins noted that Romney did something similar to Ronald Reagan in 1994. “He said, ‘I’m not a Reagan Republican,’ and the bottom line is: the party today is Donald Trump’s party. It’s not Romney’s party.”

“He’s a fool, and he is also absolutely a treacherous fool,” said Dobbs. “He’s an embarrassment to the state of Utah. That’s the way it’s going to be because he’s obviously committed to his role as the smallest man in the Senate. It’s disgusting.”

Romney has been roundly criticized for his position, most notably by his niece, RNC Chairwoman Ronna McDaniel.