Activists are using lawsuits to push for private prisons with Immigration and Customs Enforcement (ICE) contracts to pay detainees minimum wage if they work, but the proposal is “not as easy as just paying these people minimum wage,” tax expert Ryan Ellis told The Daily Caller News Foundation Tuesday.

“If Congress instead forced these companies to pay the federal minimum wage, their profit margins would drop dramatically. … But if privately run detention centers rely on a business model based on forced labor, perhaps they should not exist at all,” anarchist activist Victoria Law wrote in a Jan. 29 New York Times op-ed.

The Southern Poverty Law Center (SPLC), Washington state Attorney General Bob Ferguson and others have filed suits against companies like GEO Group and CoreCivic that have contracts with ICE to detain immigrants ahead of asylum or deportation hearings. The suits are connected to the voluntary work program that the detention centers in multiple states have implemented, according to ICE guidelines.

Ferguson’s office argues that GEO Group should be paying all inmates taking part in the voluntary work program at its Northwest Detention Center in Tacoma, Washington, the state minimum wage of $11.50 an hour. (RELATED: Government Shutdown Is Causing Thousands Of Immigration Hearings To Be Canceled)

“It’s not as easy as just paying these people minimum wage. … People will run with a half-baked idea and not realize the unintended consequence of what they’ve proposed,” said Ellis, who’s the president of the conservative nonprofit Center for a Free Economy.

He predicted that Law’s proposal to treat detainees as employees would be an administrative mess that would necessitate looking at each detainee on a case-by-case basis.

“How Social Security taxes are treated for a non-resident very much depends on what country that non-resident comes from,” he said. “In the best of circumstances, it’s complicated and messy dealing with thousands and thousands of ICE detainees who may come from two dozen separate countries — it can get very complicated.”

Why Is The Washington Attorney General Suing?

The lawsuits against the private prison companies vary, but Ferguson’s suit accuses private prison company GEO Group of violating state minimum wage laws by paying eligible detainees at least $1 a day for doing work like cleaning bathrooms or preparing meals. The detainees can use the money to pay for phone calls or items like snacks and toiletries.

Conversely, incarcerated U.S. citizens in facilities like state prisons can be forced to work for as little as 8 cents an hour cooking and cleaning, reported The Washington Post in 2018.

Ferguson’s office says the private detention center is not included in state minimum wage exemptions that apply to “[a]ny resident, inmate, or patient of a state, county, or municipal correctional, detention, treatment or rehabilitative institution.” 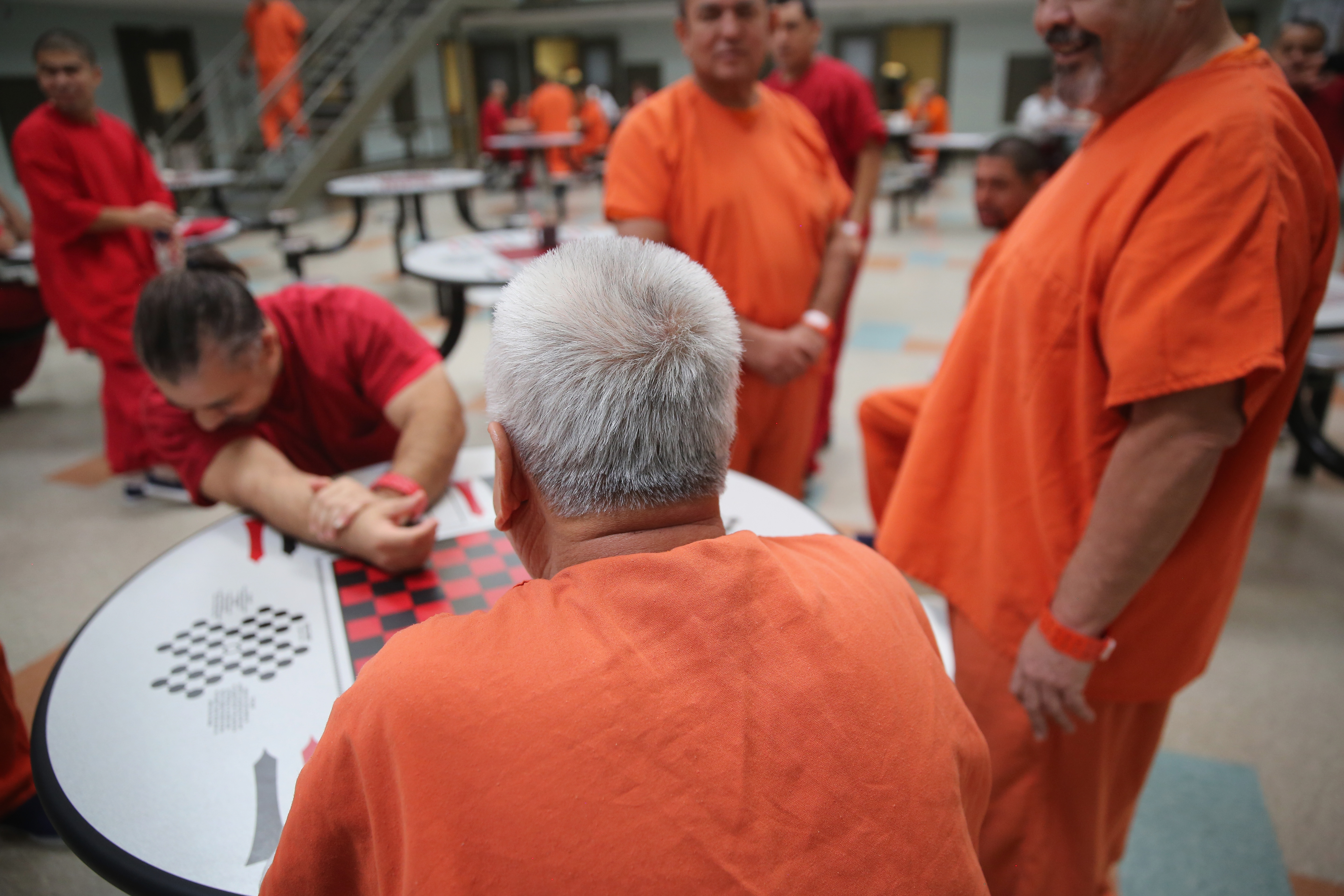 Immigrant detainees talk while in a general population block at the Adelanto Detention Facility on November 15, 2013 in Adelanto, California. The facility, the largest and newest Immigration and Customs Enforcement (ICE), detention center in California, houses an average of 1,100 immigrants in custody pending a decision in their immigration cases or awaiting deportation. (Photo by John Moore/Getty Images)

But Ferguson’s suit doesn’t address how paying illegal detainees would work. Would they have to pay into Social Security, like green card holders? How would the government tax the wages? The Daily Caller News Foundation asked Ferguson’s office multiple times, but Ferguson’s spokesperson was not able to answer those questions.

Ferguson filed the suit in 2017, but other suits have been going on since the Obama administration. The SPLC’s class action suit against CoreCivic regarding its facility in Stewart County, Georgia, was filed April 17, 2018, after cobbling together suits dating back as far as 2014, according to a press release.

Wilhen Hill Barrientos of Guatemala joined SPLC’s class-action lawsuit against CoreCivic while waiting on an asylum claim in its Stewart County facility. Law described how Barrientos said he was treated in her op-ed:

According to Mr. Barrientos’s lawsuit, one night a guard awakened him for the 2 a.m. shift in the kitchen rather than his scheduled 10 a.m. shift. When he refused, the guard threatened to move him to a violence-plagued dormitory, so Mr. Barrientos acquiesced.

How Many People Are In ICE Detention?

Private companies are responsible for the detention of roughly 70 percent of the immigrant detention population, which translates to more than 26,000 people, according to 2017 numbers cited by the Sentencing Project. Issues like this are especially concerning in light of the nation’s immigration case backlog, which grew from roughly 800,000 to 880,000 cases between Dec. 21 and Jan. 11 because of the partial government shutdown. 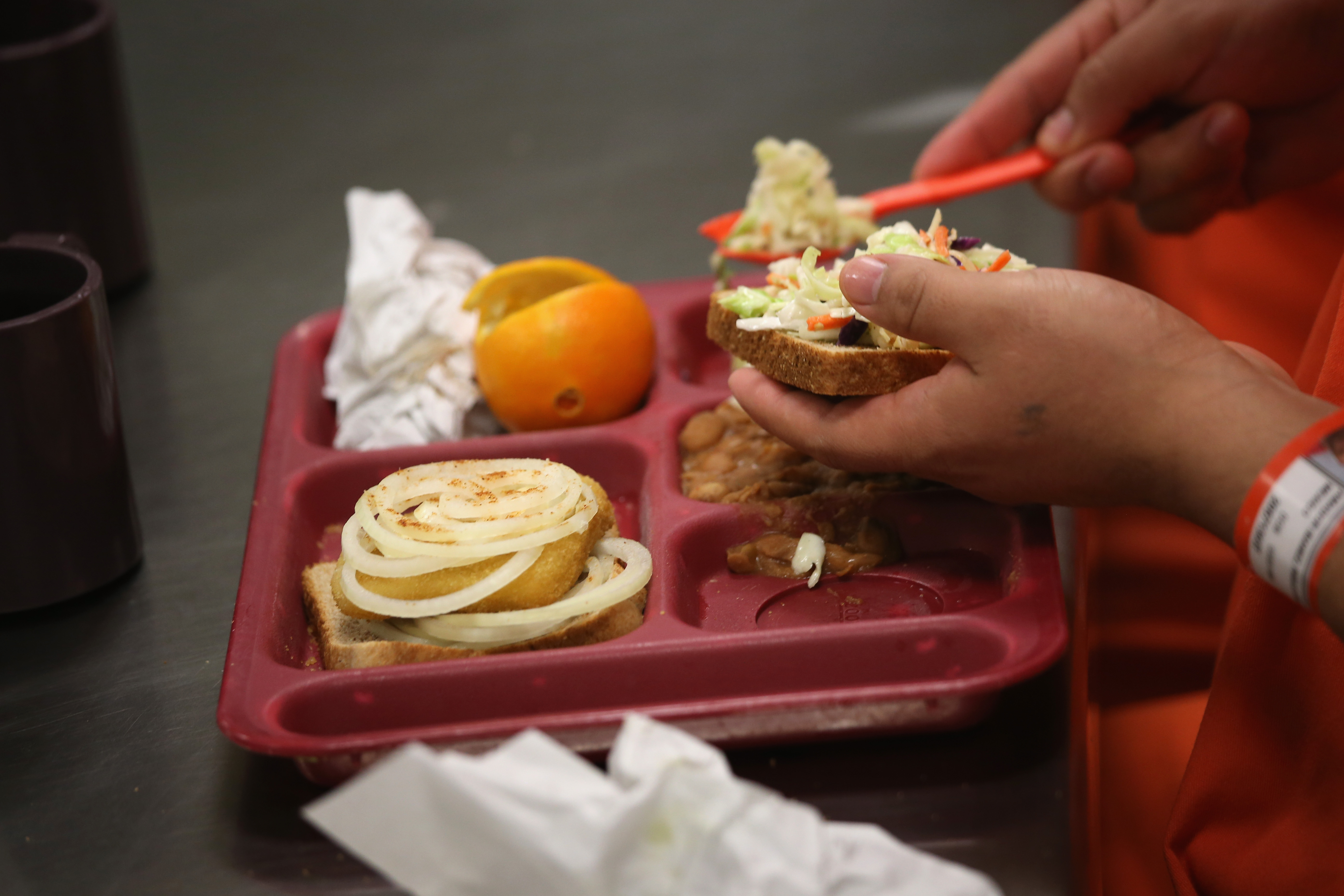 Immigrant detainees eat lunch, one of three meals a day, at the Adelanto Detention Facility on November 15, 2013 in Adelanto, California. (Photo by John Moore/Getty Images) 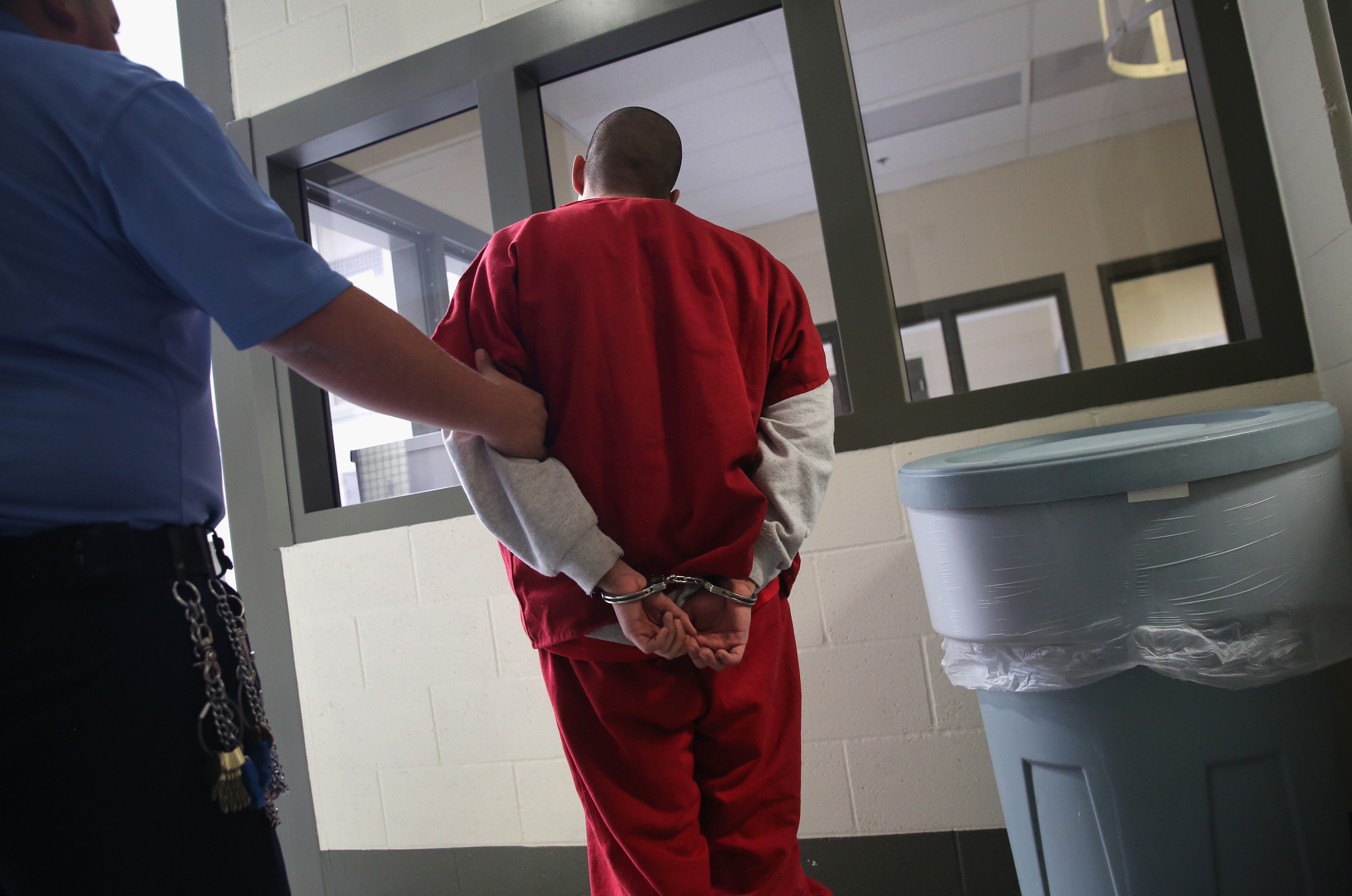 A guard escorts an immigrant detainee from his ‘segregation cell’ back into the general population at the Adelanto Detention Facility on November 15, 2013 in Adelanto, California. The facility is managed by the private GEO Group. (Photo by John Moore/Getty Images)

Law advocated for members of Congress to require companies like GEO Group to pay detainees minimum wage. But 18 Republican members of Congress (some of whom are no longer in office) signed a March 7 letter explaining why this would be a bad move before Law wrote her op-ed.

“For decades, including during the Obama Administration, pursuant to these established guidelines, facilities have been paying alien detainees $1 per day for [Voluntary Work Program] work without any legal controversy. ICE-operated facilities pay aliens $1 per day and are not being sued,” the members of Congress wrote.

GEO spokesman Pablo Paez issued the following statement after the members of Congress sent the letter to then-Attorney General Jeff Sessions and others, according to WaPo:

The Obama Administration set the Performance-Based National Detention Standards which govern the Voluntary Work Program at all ICE Processing Centers, public and private. The wage rates associated with this  federally mandated program are stipulated under long-established  guidelines set by the United States Congress. As a service provider to the federal government, GEO is required to abide by these federally mandated standards and congressionally established guidelines. GEO has consistently, strongly refuted the allegations made in these  lawsuits, and we intend to vigorously defend our company against these  baseless claims.

Private detention facilities were in the news in November when a nearly $230 billion California teacher retirement program voted to get rid of its investments in private prison companies CoreCivic and GEO Group in a push from teachers and activists who wanted the program to pull out of a variety of industries.

TheDCNF reached out to the SPLC several times but did not receive a response at the time of publication.