Republicans, conservatives and even some environmentalists are criticizing the final version of New York Democratic Rep. Alexandria Ocasio-Cortez’s Green New Deal as not yet ready for prime time. One major Democratic lawmaker even downplayed the idea’s importance going forward.

The resolution calls for “10-year national mobilizations” toward a series of goals aimed at fighting global warming, according to a copy of the bill obtained by NPR. A separate fact sheet claims the plan would “mobilize every aspect of American society on a scale not seen since World War 2.” Not everyone feels the same.

“Who knew? ‘Green New Deal’ is a resolution, not a bill, which means it’s a ‘statement,'” Republican Sen. John Cornyn of Texas wrote in a tweet Thursday morning after Ocasio-Cortez and Democratic Sen. Edward Markey of Massachusetts released the plan. Other GOP lawmakers likewise dinged the Green New Deal for lacking seriousness.

Who knew? “Green New Deal” is a resolution, not a bill, which means it’s a “statement.” @playbookplus

Republican Rep. Doug Lamborn of Colorado, for instance, criticized what he believes is a tendency of Democrats to embark on unrealistic agenda.

“I guess I can understand if someone who has not a lot of life experience and they’re proposing something that’s extremely unrealistic,” he said at a House Natural Resources Committee hearing Wednesday. “Impossible. But what I don’t understand is adults, grown-ups who are older and more mature are also advocating something that is impossible.” 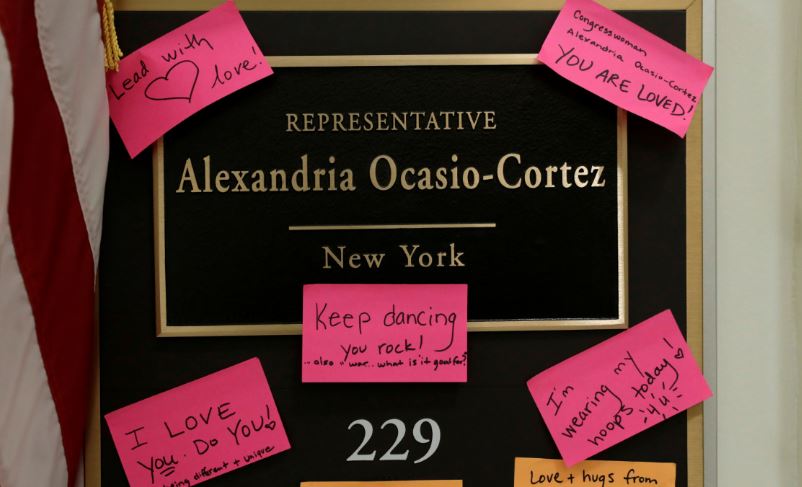 The office of U.S. Rep. Alexandria Ocasio-Cortez is pictured at the Capitol in Washington, U.S., Jan. 16, 2019. REUTERS/Yuri Gripas/File Photo/File Photo

University of Colorado professor Roger Pielke Jr. echoed both Lamborn’s and Cornyn’s positions. “Almost no policy substance and that which is there is pretty weak tea: ‘reduce emissions … as much as technologically possible,'” Pielke Jr. wrote in a tweet Thursday. “Not yet worth debating here as there is not much to debate.”

Other conservatives called the plan a socialistic ploy. “Wealth transfer schemes suggested in the radical policies like the Green New Deal may not be the best path to community prosperity,” Illinois Rep. John Shimkus, the top Republican on the House Energy and Commerce subcommittee on climate change and other environmental issues, said in a statement.

The plan removed a call to eradicate fossil fuels, which is causing heartburn for some environmentalists. (RELATED: Ocasio-Cortez Releases ‘Green New Deal’ Outline. It Calls For ‘Repealing Historic Oppression’)

Friends of the Earth President Erich Pica, for instance, was dour in his assessment of the final copy. “[T]he failure to mention and explicitly state that we have to end the era of fossil fuels is just a huge missed opportunity to be real about where we are and where we need to go,” Pica said in a statement Thursday, according to The Washington Post.

House Speaker Nancy Pelosi downplayed Ocasio-Cortez’s plan and even poked fun at the idea. “It will be one of several or maybe many suggestions that we receive,” the California Democrat told reporters Wednesday. “The green dream or whatever they call it, nobody knows what it is, but they’re for it, right?”